Time to turn to the spirit that currently occupies much of my attention: rum

I will admit to having a bit of an ulterior motive here. Over at one of my favorite drinks blogs, RumDood is having a contest to write about our favorite rum experiences. And I can't do better than to describe my entry into the world of rum.

I arrived here by something of a circuitous route. For many years I avoided rum after a less than thrilling experience at a rum tasting class held at my alma mater. While I don't remember exactly what was served, I'm pretty sure they were decent aged rums. But straight spirits have almost never done much for me and the unfamiliar flavors left me swearing off rum entirely.

However, after discovering a love for cachaça, I found myself willing to give rum another chance. While there are distinct differences between cachaça and rum, they both come from sugarcane bases. To help the process along, I serendipitously read about a new-ish rum on the market, Oronoco, which is produced primarily from fresh sugarcane, much like cachaça. To put a twist on that basic formula, it is also blended with a touch of aged Venezuelan rum. This sounded like an excellent compromise. After picking up a bottle, I found that it has hints of the vegetal notes usually found in cachaça, but they are subdued by the aged rum. There are also very strong vanilla presence and a fair bit of molasses sweetness as well. While vanilla is a fairly common flavor element in rums, I find that Oronoco reminds me strongly of baked goods. This is in contrast to other rums such as El Dorado's 3-year aged white rum, which has a much more savory vanilla character. So while Oronoco can make for a mean daiquiri, these days I find that I prefer to place it in a supporting rather than a leading role as the vanilla can become a bit overwhelming.

Now that I had come around to the idea of rum a bit, I plunged all the way in and went for an aged rum. Again, primarily on the basis of good reviews, I decided to buy a bottle of Cruzan Estate Single Barrel rum. This really is a different beast. The ESB is a blend of rums aged from 4 to 12 years (the single barrel nomenclature refers to a large mixing vat in which the blend is married for another year or so) and has fairly strong oak notes. So much that when I got my roommate to try some her first response was that it smelled like whiskey. While my first impression was of an overwhelming woody smell, revisiting the ESB has revealed that the oak comes along with a gob of spices and a hint of alcohol and vanilla. The taste is much spicier, overwhelming some of the more delicate flavors in the nose. The more aggressive wood and spice flavors took some work to properly enjoy, but under the right circumstances it can really hit the spot. 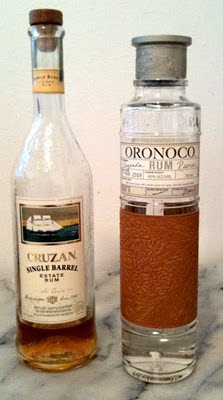 Well used and well loved.
Both of these rums were great introductions to the rum world. The Oronoco is excellent for anyone scared by funkier rums and the ESB should hit the spot for whiskey drinkers. In honor of the first three varieties of rum that I genuinely enjoyed, here is a drink that joins them together into a glorious whole:

Muddle ginger, lemon and lime pieces with simple syrup. Add rums and bitters, shake with ice and double strain into a chilled glass.

The sourness of the lemon and lime, the bite of the ginger and the flavors of the various rums all play well with each other. The ESB works with the Oronoco, reinforcing the aged rum element. The Oronoco and cachaça bring out each others grassier notes, with all three bringing sugarcane and molasses along. Quite an enjoyable little drink.

Next time, the adventures of making my own cocktail ingredients.
Posted by Jordan at 6:33 PM