As we head into spring, it's going to be time for warmer weather cocktails again. Break out that bottle of gin that's been hiding in favor of richer spirits. And what better drink to make than a gimlet? But if you're going to make a proper gimlet, that calls for lime cordial. What's that? The nasty, HFCS-ladden monstrosity of Rose's Lime Cordial found on every liquor store shelf? Perish the thought.

Lime cordial began in the 19th century as a way for sailors to preserve lime juice that could be consumed on long voyages to hold off scurvy. In essence it was simply a mixture of lime juice, sugar and lime peels simmered briefly to make a syrup. It's relatively easy to make and adds a new dimension to a number of different classic and tiki cocktails. This recipe comes from Imbibe magazine's "Mix It Up" feature in their Jan/Feb 2011 issue.

Zest the limes and save the peels. Don't worry about getting some of the bitter pith as it will actually perk up the resulting syrup a bit. Juice the zested limes and strain the juice into a saucepan. Add sugar and simmer for ~20 minutes. Let the syrup cool for 5 minutes, then add the lime peels and steep for 15-20 minutes. Strain the syrup through a mesh strainer into a clean container and store in the refrigerator. The cordial should keep for several months.

While a gimlet is the classic use for lime cordial, there are a number of other recipes that call for it, from the tiki-style Suffering, Dying and Dead Bastards, to classic drinks from the Cocktail Database, including this little number: 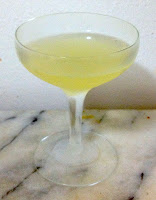 While this drink calls for light rum, I decided to tweak it a bit by using the rather potent 100-proof rhum agricole blanc from La Favorite.

The nose is dominated by the vegetal funk of the rhum agricole, backed up by a bit of lime oil from the cordial. The initial sip is rather syrupy with hints of the orange liqueur, making it seem like the drink is going to be overpoweringly sweet. However, this quickly transitions to snappy lime juice and the alcoholic bite and funky pear flavors of the rhum. There's a bit of lingering bitter sweetness from a combination of the rhum and syrups, making it interestingly more-ish.

On the face of it, this is simply a rhum-based New Orleans sour, but the use of lime cordial makes for a more interesting drink than one would get with a more standard recipe.
Posted by Jordan at 11:06 AM