Some spirits are just meant to be together. Rum and brandy come from distinctly different worlds - rum is derived from the waste products of processing a massively mutated grass, whereas brandy is a highly refined spirit made from carefully tended grapes. And yet when put together they can bring out the best in each other. 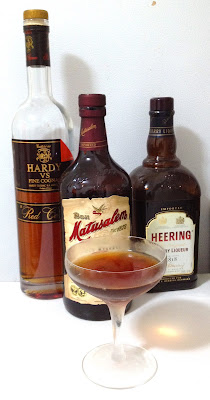 Combine all ingredients, stir with ice for 15 seconds and strain into a chilled cocktail glass.

The nose is dominated by notes of dried cherries from the Heering, with a juicy spiciness from the  interaction of cognac, vermouth, and bitters that reminds me favorably of the Belle Époque. The brandy peeks up behind all of the other elements. The sip leads off without much fanfare, the flavors slowly building to a crescendo across the tongue. The wine notes of the vermouth come in first, followed closely by the cognac. The rum then sallies forth with gusto, leading into sweet and bitter spices from the Angostura and vermouth, finishing with lingering bittersweet chocolate and cherry notes.

While I pulled this together from instinct, it closely resembles the Vieux Carré in form. I wanted a drink using rum, brandy and sweet vermouth. Ron Matusalem Gran Reserva has some cherry notes in it, which made me think of tempering the bitterness of the vermouth with a bit of cherry Heering. Overall I'm rather pleased with how this drink turned out, as it provides a robust, balanced experience that showcases all of its individual elements very nicely. The finish in particular makes it very more-ish as it melds sweet and bitter flavors exquisitely.

The nose presents some interesting notes. Out of the melange, I get a rather distinct whiff of apple juice along with some dark fruit, maybe cherry, from the intersection of the grenadine and orgeat, and just a hint of nuttiness. The sip begins smoothly, without a lot of sweetness, leading into a mild touch of rum. This segues into a burst of different flavors coming in rapid succession - brandy, then subdued lemon juice and finally some slightly bitter nuttiness from the orgeat. The finish contains lingering barrel flavors from the brandy with a bit of fruit - both from the pomegranate and a bit of apple from the spirits.

This drink is a peculiar mashup of the Bacardi Cocktail and the Japanese Cocktail. And yet the elements come together in a rather pleasing fashion. The rum and brandy become something other than the sum of their parts. I picked El Dorado 5 Year rum and Hardy VS cognac because they're both rather fruity examples of their respective spirits. The El Dorado brings a lot of great tropical fruits like mango and passionfruit while the Hardy retains a strong tie to its origins with the grape and wine flavors holding fast against the barrel influence. It's surprising that this is not a particularly sweet drink, given the larger measure of syrups over citrus. Somehow everything stays in tension without becoming a jumbled mess. 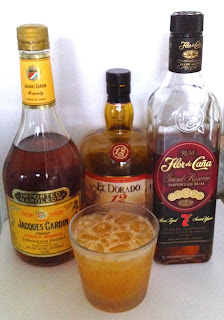 The sip begins with the rich rum flavors from Guyana and Nicaragua. The fruit flavors of lime and orange then come in, with a solid finish of Demerara, brandy and orgeat.

This is one of those drinks that comes very close to the dangerous state of 'muddled flavor profile', but by bumping up the spirits it manages to come together reasonably well. Without that tweak, the drink becomes overwhelmed by the juices. Picking the right spirits is also quite important. I went with Jacques Cardin VSOP brandy as it tends to have fairly strong maple syrup and vanilla flavors, which mesh well with the rums. El Dorado 12 year is my favorite Demerara rum, as it's incredibly rich and will hold its own extremely well in just about any rum-based cocktail. Flor de Caña 7 year is also a rich, well-aged rum that helps to lend the drink some backbone. And most importantly, they all play well together.
Posted by Jordan at 10:02 PM