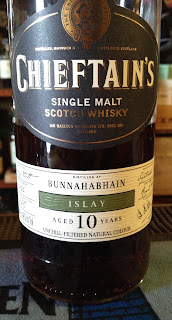 Unlike the Maltman Bunnahabhain, this one does not have any overt flaws. Instead it's just completely overwhelmed by the cask, with only hints of distillery character visible underneath the heavy blanket of sherry. Admittedly, that is a popular style these days, but this doesn't have the power of cask or batch strength releases like Aberlour A'Bunadh or the finesse of something like Glendronach Revival. So I feel like this would have been better either bottled at full proof or left to age long, so that they sherry could integrate more with the spirit. Admittedly, when they were able to sell these bottles for $70-90, I can't blame them for moving stock out the door, but I won't be grabbing a bottle for myself, no matter how much I usually like sherried Bunnahabhain.
Posted by Jordan at 8:20 AM