One of the goals I've had in exploring blends is to see if I can replicate some of the blends that are already out there. While I don't have nearly as much whisky to work with, I can at least approach some of the flavor profiles.

Morrison-Bowmore, for a long time (before Suntory snapped up Beam), was composed of three different malt distilleries - the eponymous Bowmore on Islay, Auchentoshan in the Lowlands, and Glen Garioch in the Highlands. Unsurprisingly, these three malts were combined into a proprietary blend called Rob Roy.

While I currently don't own anything from Glen Garioch, I do have the standard 12 Year expressions from Auchentoshan and Bowmore and have previously found that they work well together. 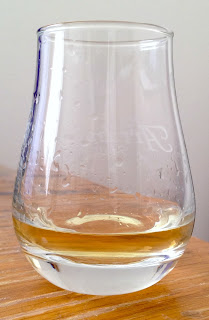 Taste: moderately sweet malt and grain up front, gaining sherry overtones and an undercurrent of oak with a bit of peat and smoke further back. After dilution, the malt becomes sweeter and more prominent, the peat and oak integrate while spreading out across the palate, giving it a more bittersweet profile overall.

For a grain-heavy blend proofed down to 40%, this was surprisingly tasty. Interestingly, the malt actually came to the fore after adding some more water, which is a property I've noticed from a handful of other blends before. This leads me to wonder if there is a rational for bottling most blends at a lower proof, beyond simple economics. Maybe some of them really do just work better that way? At the very least, I'm starting to believe that lower bottling proofs make the flavors of grain whisky less readily apparent, which would be a strong incentive for blends that are composed primarily from grain whisky.
Posted by Jordan at 7:04 AM