Not a lot to say about this one. Despite the label, there is very little information about its provenance. It was distilled at Auchentoshan sometime in 1999, aged for at least 12 years in an oak cask, then bottled at 46% without coloring or chill filtration for Douglas Laing's McGibbon's Provenance line. 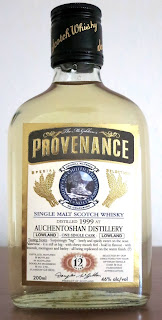 Nose: thick bourbon cask influence, spicy oak, a little sour and funky (Jamaican rum-style), overripe fruit. After adding a few drops of water the funk is amplified and it is much drier overall.

In most respects this seems like a fairly basic bourbon cask malt. The funkier notes that remind me of Jamaican rums. It's not impossible that this is a rum cask matured or finished malt, but that seems a little unlikely given that Provenance is the more bare-bones line of single malt from Douglas Laing.

But whatever the source, that character keeps it from being generic or boring. With that said, water amplifies the funk a bit too much even for me and throws the malt out of balance. Unless you're really into those notes - and even then you might as well drink Jamaican rum instead - I'd hold off on the water. This was already reduced as far as it could reasonably go.
Posted by Jordan at 11:24 AM