I like Ledaig a lot. While the younger refill casks haven't always tickled my fancy, the OB 10 Year from first-fill casks and the younger sherry casks have really done it for me. So I was fairly excited when The Party Source offered an older Ledaig at what appeared to be a rather reasonable price.

This whisky was distilled in September 1994, filled into refill American oak hogsheads, then bottled at 43% probably with chill filtering in April 2011. 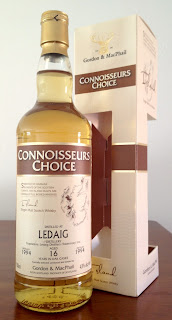 Nose: dank oak, a touch of malty chocolate, berries, gently floral, a touch of vanilla, a little bit of sulfurous Tobermory funk. After adding a few drops of water it becomes more rounded, the fruit notes are amplified, the funk retreats a bit and integrates with the oak,

Taste: bittersweet through out - balanced malt and oak with vague floral/fruitiness and vegetal funk peaking around the edges, becomes more overtly bitter at the back. After dilution the bitterness is tamed and it becomes rounder in a similar fashion to the nose, but falls a little flat after a while.

This was, to put it mildly, not what I thought I was buying. Despite the convention that the distillery and most independent bottlers use, I'm pretty sure this was Tobermory's unpeated spirit, rather than the heavily peated spirit that is normally designated as Ledaig. And ultimately there's just not a whole lot going on in this whisky, maybe even less than what can be found in the OB Tobermory 10 Year. It's possible that the spirit would have been more lively at higher strength, but by the same token it might have just been too hot. And while letting it stay in the casks might have created further development, the balance of spirit and oak makes me think this could have gone over the edge fairly quickly. Sadly, they can't all be winners. The best use I can see this whisky being put to is either as a gentle way to ease someone into Tobermory's spirit or, more favorably, as a base for further blending. I found that a little bit of something sherried or peated gave it more pop and created a reasonably engaging whisky. But for a $60 malt that feels like damning with faint praise.
Posted by Jordan at 9:52 AM