Amrut was the first distillery in India to produce single malt whisky. When distillery began making malt whisky in the 1980s it was used exclusively for producing blended whiskies. It was not until 2004 that they launched a single malt whisky, targeting a profile similar to that of Scottish malt whisky. Since then they have released a panoply of different whiskies using both local unpeated malt and imported peated malt as well as an extraordinary variety of cask types.

Much like Bruichladdich in the early to mid-2000s or, more recently, Kavalan, it's somewhat unclear whether the popularity of Amrut is primarily driven by quality or novelty, both from the rarity of Indian single malt and the creativity of their production methods.

This whisky was distilled from 90% local unpeated malt and 10% imported peated malt, then aged in ex-sherry butts, followed by ex-brandy casks, then finally ex-rum casks and bottled at 50% without coloring or chill filtration. 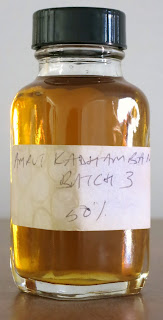 Nose: maple syrup/molasses/rum, oatmeal, malt, grape brandy, baked apples, orange peel, sherry, spicy oak in the background, a thread of wood smoke, a little herbal. After adding a few drops of water the rum and brandy come to the fore, some berry notes come out.

Taste: sweet oak up front, becoming more tannic towards the back, picking up some of the various cask notes on top from the middle - but everything is kind of indistinct/muddled - and herbal notes peek out at the back. After dilution the elements integrate and flatten - the oak is less sharp and bitter, letting the cask influences shine a bit more, and a touch of peat comes out at the end.

I feel like Amrut's most significant accomplishment is to have produced a relatively young malt without any of the green notes that I expect from younger whiskies. At the same time, there's a lack of integration that seems spot-on for younger malts - the casks have each left their mark, but haven't had enough time to develop into something more. All of that comes with the caveat that I'm tasting from a sample that may have degraded, but given the price these releases command, I don't think they're something I would spend my own money on.
Posted by Jordan at 8:00 AM