As with many drinks that I have gleaned from the Cocktail Database, it's a little unclear where this comes from since I can't find any other references to it on the internet. From a little more sleuthing it appears to be based on the Sherry Twist from Harry Craddock's Savory Cocktail book. Because the original result wasn't coming together, I added a touch of orgeat to bring things together and a dash of orange bitters to keep it from becoming too sweet. 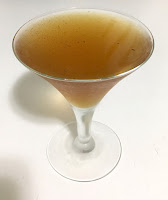 Combine all ingredients, shake with ice, strain into a chilled cocktail glass, then garnish with a sprinkle of cinnamon.

This drink is a very odd duck. It only barely coheres and could probably use further tweaking to really shine. It should be fairly stiff given that the only non-alcoholic ingredients are a bit of syrup and some citrus juice, but the fact that so much of it is wine based seems to keep it from having too much snap. With all that said, I'm not unhappy with it and could see it becoming a more pleasant drink. Using a kina wine like Lillet or Cocchi Americano instead of dry vermouth might do the trick, but that could require an extra dose of bitters to keep it from becoming too sweet.
Posted by Jordan at 8:39 AM