For the last decade or so Balblair has been releasing younger (10-12 years old) vintage single malts. I tried a couple of them (1997 and 2001) a while back and found that their character varied quite significantly despite their nominally similar composition. This whisky is part of the same lineup and was released in 2012 from what Balblair claims were first-fill ex-bourbon casks bottled at 46% without coloring or chill filtration.

This miniature is from a set I purchased at the Good Spirits Co in Glasgow in 2013. 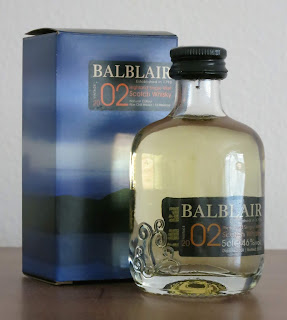 Taste: sweet malt beginning up front, joined by green youthfulness all the way through, some vague fruitiness (tropical/berries) starting around the middle, more malt with a sour edge going into the finish. After dilution it becomes sweeter and the mouthfeel is thicker, but the green notes become stronger in the middle.

Finish: green malt with a touch of grainy rather than oak-y bitterness, a little sour

If you've had younger Balblair before then you probably know about what you're in for here. As with many of them if feels like this is composed entirely of whisky from second- or third-fill casks that have barely been able to round off the rougher edges of the new make spirit. The choice to bottle at 46% appears to have been necessity more than just style, since the aromas absolutely fall apart with even a little bit of water. Compared to the 2001 this was more straightforward, but also more boring. Overall, it was fine but not something that I would search out.
Posted by Jordan at 8:00 AM