If Macallan is known for one thing it is its sherry cask matured spirit. While the "Oh crap, we can't keep up with demand" Fine Oak series blended bourbon casks (probably originally intended for blends) with a smaller proportion of sherry casks, the only way to get pure bourbon cask matured Macallan has been independent bottlers. This one is from one of Duncan Taylor's lines that was eventually dropped in favor of their NC^2 line. Both offered largely younger whisky at 46% without coloring or chill filtration at fairly reasonable prices.

This whisky was distilled in 1992, filled into (probably Nth refill) ex-bourbon casks, then bottled in 2003 at 46% without coloring or chill filtration. 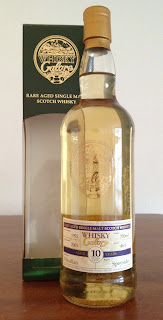 Nose: so much ethyl acetate, clean malt, a little green/grassy, unripe apples/pears/peaches, some vanilla in the background, very little oak, orange peel. After adding a few drops of water the ethyl acetate settles down a bit and it gets maltier, the vanilla is amplified but the fruit notes fade a bit into the background.

Taste: malt sweetness with an undercurrent of ethyl acetate throughout, a pleasant thickness around the middle, and a bit of savory oak/malt going into the finish. After dilution it becomes much sweeter, the fruitiness around the middle is amplified, and the savory notes at the back are joined by some orange peel, but there's also more grassy bitterness in the middle.

This was a somewhat disappointing whisky. While there's clearly some good, fruity spirit in there, it's the strong ethyl acetate notes throughout make it hard to enjoy what it has to offer. With slightly more active cask with more porous wood I can envision this being much better, but as is I feel like it would need many more years of evaporation to settle into something good. It also seems rather similar to the Whisky Galore Glenlossie I tried a while back, which also had some prominent ethyl acetate notes. I'm more than a little surprised that these casks were chosen for bottling, even with such a famous name attached, but I've questioned the bottling decisions made at Duncan Taylor during the 2000s and this seems of a piece with them.
Posted by Jordan at 8:38 AM