Until recently most of the distilleries in Bacardi's portfolio flew below the radar, primarily going to blends with some casks escaping into the hands of independent bottlers. With the rising profile of single malts in general the management decided to raise their profile and released a series of single malts from each of their distilleries. Most interesting among the bunch is Craigellachie, which has a number of features in common with fan-favorite Mortlach in the Diageo stable.

This whisky was aged in refill American oak casks (both ex-bourbon and ex-sherry) then bottled at 46% without chill filtration but possibly with caramel color.

I tasted this whisky from a purchased sample from WhiskySite. 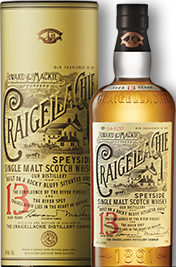 Nose: fairly immature green malt, dirty Craigellachie funk, a layer of cleaner sherry, vanilla. After adding a few drops of water it has more alcohol heat that covers up the other aromas, leaving it with little beyond cleaner malt and vanilla.

Taste: sweet malt with a somewhat immature overlay throughout, sherry in the background, sliding into bitter but not tannic oak and some dirtier notes at the back. After dilution the immature character is pushed back, but doesn't entirely disappear, while the overall structure remains the same.

In this day and age, this is a deeply strange OB single malt. I'm honestly not sure what audience this is targeting, because it's just so far outside the norm. With slightly more active casks I think this would be a winner for me because I like the dirtier elements of the malt. As is, I find it too raw in a way that covers up some of the potential complexity.
Posted by Jordan at 8:00 AM