Louis Royer Force 53 has a very particular place in my journey in the spirits world. I first heard about it through Cocktail Chronicles singing its praises in pre-Prohibition cocktails. From there it became something of a white whale, a spirit that I could occasionally glimpse on the occasional liquor store website, but never any that would ship to me.

Lo and behold, it randomly appeared in the OLCC system, even at MSRP. I was able to snag a bottle before they disappeared, many years after I had shifted my focus primarily from cocktails to whisky and other spirits. 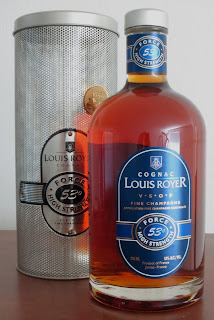 Nose: rather intense for a cognac, but also somewhat closed - moderately sweet grapes and apples, a thicker layer of fresh French oak, toffee, floral and citrus peel notes in the background. After adding a splash of water it become softer and richer, but almost all of the complexity is lost among a wave of caramel, with just some basic grape notes in the background.

Taste: sweet up front with thick grape, caramel, and oak notes, some citrus peel (mostly orange) in the background, shifting towards more tannic oak, vanilla, and a touch of chocolate around the middle, with some heat towards the back. After dilution it becomes thick and rich with almost none of the original heat, but most of the progression and development is lost in a wash of caramel and grape sweetness.

This does what it says on the label - it takes a fairly standard cognac profile and amps it up with a higher bottling proof. Compared to the Rémy Martin from earlier this week, the next most noticeable difference is how much more oak influence is in this spirit.

It seems fairly clear to me that this is built primarily for cocktails. The features that make it somewhat brash and unrefined at full strength are the same ones that help it stand up against other formidable ingredients in a mixed drink.

In a Sidecar the nose is dominated by woody and floral notes from the cognac, with backing orange peel. The sip opens with strong cognac notes, with slowly growing orange notes into the middle, then more tart lemon near the back. The finish is long with tannic notes on top of lemon and bitter orange peel, plus a touch of vanilla.

Now this is more like it. While the orange liqueur isn't perfect here, the cognac absolutely shines. The higher proof really lets it punch through the other elements, keeping itself in the fore despite the strong character of the liqueur and lemon. While Force 53 isn't cheap, it is absolutely worth the extra expense for the way it can stand up to the strongest ingredients. This will take almost any drink calling for cognac to the next level as it has a lot of what makes bonded bourbons and ryes spirits that bartenders have been reaching for all through the cocktail renaissance.
Posted by Jordan at 7:00 AM