This release came about as a collaboration with the Scottish musician Dougie MacLean, who wrote a famous song of the same name in 1977. He grew up in the same Perthshire region where Edradour is located and helped to select some of the casks that went in to the original version.

The whisky is originally aged in ex-bourbon casks, then transferred to ex-sherry casks for three years and bottled at 46% without coloring or chill filtration.

I purchased this miniature from The Whisky Exchange in 2012. 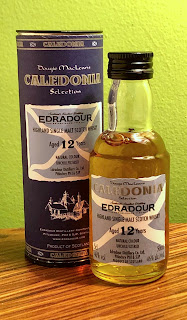 Taste: thick, rich sherry begins up front and carries through to the back, there's a thick/oily mouthfeel, a little funk around the middle, honied malt underneath, more bittersweet and savory going in to the finish. After dilution the sherry fades a bit to reveal more malty sweetness and becomes brighter, but there's some unripe fruit tartness and peppery spice going into the finish.

Well... that was... sherried? Again, I'm not sure if this miniature has gone off, but there's really not much else going on here. It's surprisingly generic given all the distillery character I got out of the 10 Year, but maybe that's the heavy handed sherry casks. In some ways this reminds me of overly sherried Bruichladdich, which also suffers when the distillery character can't shine through.

Water helps push back the sherry, but it doesn't reveal much that makes the experience better. If anything it reads as more youthful. I might not say no to a fresh bottle if it was offered to me, but I'm pretty sure there are other whiskies I'd rather be drinking.
Posted by Jordan at 10:36 AM