As I mentioned not too long ago, a love of rhum agricole has been kindled in me fairly recently. While it was a shunned category for some time, I'm now diving in head first. While the flavors that tend to be found in rhums aren't quite what most people expect from rum, they can be quite incredible in their own right. For those who are new to rhum, I'll lay out a quick primer. The main feature of agricole rhums that makes them distinct from other rums is that they're made from fresh cane juice.

While there are other rhums made from fresh sugar cane juice, notably Haiti's Rhum Barbancourt and a handful of others, rhums made on the island of Martinique lay claim to the name "rhum agricole", as any rhum claiming that name theoretically has to follow the rules laid down by the Appellation d'Origine Contrôlée (AOC). With that said, rhum agricole can also be used to describe cane juice rums in general, so that really only matters when it comes to packaging. In addition to being made from fresh cane juice, AOC rhum agricole also has to be distilled to ~70% alcohol, which is then cut down to 40-50% alcohol after aging.  Being made from fresh cane, agricole rhums tend to have very strong vegetal flavors, often described as grassy, which can be disconcerting to drinkers who don't expect them. However, in certain circumstances, they can also be very tasty. 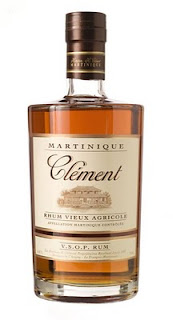 Produced by Rhum Clément, the VSOP borrows a term from the cognac industry, Very Special Old Pale. After fermentation and distillation, this rhum is aged in French oak for a year and then transferred to re-charred ex-bourbon barrels for another three years. Even though it's a relatively young rum, VSOP has a lot going on and is much smoother than its age would indicate. Amber honey-colored, the smells are primarily cane, a touch of brown sugar and some alcohol. The taste carries through with the same flavors as the nose, adding a bit of brandy and a bit of pepper followed by a very mild alcohol burn. While those qualities are all well and good, I'm ultimately more concerned with how it works in a cocktail. And there is no finer cocktail to showcase rhum agricole than the Donga Punch:

This is, in my opinion, one of the truly perfect drinks. One of Don the Beachcomber's early creations, though less well-known than others like the Zombie, it does exactly what Donn was so good at: blending ingredients around rums to highlight those rums' best qualities. The lime juice provides a pleasant amount of tartness, while the grapefruit juice slightly smoothes that out. The cinnamon syrup syncs up perfectly with the Clément, providing a coherent, delicious whole. While incredibly simple to make, it's an unmatched experience that I doubt I will ever tire of.

As I noted at the beginning of this post, there's a certain amount of debate over whether or not cane juice rhums made outside of Martinique can be properly called rhum agricole, but given that the AOC designation only started in 1996 and doesn't even cover the other French islands, that seems more than a little bit silly. Made almost entirely by hand on the estate of La Société du Rhum Barbancourt, their Five Star rhum is produced from fresh squeezed cane juice which is then fermented for 72 hours, distilled to ~90% alcohol, aged at ~50% in oak for eight years and finally diluted to 43% for bottling. Somewhat surprising for its age, this is a fairly light colored rhum, somewhere between straw and pale gold. Oak in the smell and taste are more apparent, without completely dominating the spirit. The alcohol is apparent, but not overwhelming. The taste is very clean and somewhat light, likely due to being column distilled to a higher proof than AOC rhums, which removes more of the congeners. The spirit smells of cane, fruit, a touch of brown sugar or molasses and oak. The taste recapitulates the smells, but they seem fairly high and without a lot of depth. That's not exactly a knock against Barbancourt, as it's an excellent product and an incredible value (it costs about half what a lot of other rhum agricole does), but I do wonder what it would be like if they distilled to a lower proof. They've been doing this for hundreds of years and know a lot more than I do, but I'd be interested to try the result if they did it. Everything is there, but without some of the roundness and depth that I tend to enjoy. However, I do have to say that Barbancourt Five Star works excellently in a Three Dots and a Dash:

This is a really great drink. There's a lot going on, as there are multiple layers of spice and several kinds of citrus, but they all come together really well. The Barbancourt rides along the top, providing some great smells and a clean base for the other ingredients. The ED5 plays really well with the fruit and spices. Definitely one of the classics.

One of the best things about rum is the breadth of products made from very simple ingredients. These are two of the best examples of what fresh cane juice rhum can be without breaking the bank. The Clément is an incredibly good choice, but it's also definitely a bit spendier than the Barbancourt. Either way, you really can't go wrong with either introduction to rhum agricole. It's a category that can take some getting used to, but can also be very rewarding.
Posted by Jordan at 2:46 PM