Just in case it wasn't already abundantly clear, I rather like tiki drinks. And as many are now showing they weren't always the syrupy sweet neon disasters that they became after the first golden age of tiki. Instead, the originals, many pioneered by Don the Beachcomber and Trader Vic were exquisitely balanced potions with significant amounts of thought behind their construction.

To me, one of the emblematic tiki drinks is the Navy Grog. Many tiki drinks began their lives as elaborations of a few basic recipes such as the daiquiri or the Planter's Punch. Starting with the simple combination of rum, citrus and sugar, there are a host of ingredients that can be slotted into each category to build an endless array of drinks. Another key feature of tiki drinks is the use of multiple rums to produce flavors that no single rum could contain on its own. The Navy Grog fits those features to a T, with multiple rums backed up by lime and grapefruit juices with honey syrup to sweeten the pot. All easily fit within the basic mold, but combine to produce a drink with a very different character from the daiquiri of yore. 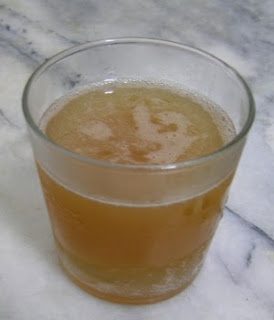 Combine all ingredients except for soda water, shake with ice and strain into a chilled glass. Top with soda water and add ice cone. (Recipe from Beachbum Berry Remixed)

I will admit that I usually stray from the recipe just a bit. Since I usually like my drinks a bit sweeter, the honey syrup (2:1) gets bumped up by a quarter of an ounce. From what I understand, there may have been a few issues translating the older Grog Log and Intoxica recipes, which used straight honey, to the Remixed recipes that call for 1:1 honey syrup, so it's probably keeping in line with how the drink is meant to taste. Additionally, while the original recipe calls for light Puerto Rican rum I tend to use gold rums, such as Ron Abuelo 7 Años or Bacardi 8 Años to give the drink a bit more depth. However, if you'd like to have a bit more snap, Flor de Caña Extra Dry might not be amiss.

Where you really get to play with the nature of the drink comes from the Demerara and Jamaican rums. These days we are blessed with quite a number of rums from each country, all with their own distinctive flavors. This allows you to construct very different drinks depending on what rums you pick. Want something more assertive that'll give you a kick in the pants? Use some Smith & Cross or Coruba for the Jamaican or Lemon Hart 80 for the Demerara. Want a drink that's smooth as the honey going into it? Shoot for Appleton 12 Year for the Jamaican or El Dorado 5 or 12-Year for the Demerara. Shooting for a balance between the two extremes? Pick Appleton V/X for the Jamaican and El Dorado 5-Year for the Demerara. I'm sure there are plenty of other options (Plantation Jamaican and Guyana rums are on my list to buy), but even just picking from my personal collection there's an enormous amount of flexibility.

To wrap this all up, the Navy Grog is a very tiki tiki drink that is well worth your while to mix up. Even with a fairly short list of ingredients (for a tiki drink), there's a lot of room to play around with flavors and make something new and exciting each time.
Posted by Jordan at 8:46 PM