The Jet Pilot is, without a doubt, one of the best tiki drinks out there. And I have evidence to back that statement up. Or at least testimonials. 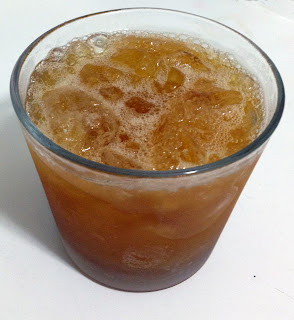 Combine all ingredients, add a handful of crushed ice, blend for five seconds and pour into a chilled old-fashioned glass filled with more crushed ice.

The sip begins with the pungent taste of Lemon Hart 151. This is one of those drinks that simply can't be made right without this quintessential tiki ingredient. Backing it up is the dunder funk of the Jamaican rum and the smoothness of the Puerto Rican rum. Following close behind are the sour and bitter fruit flavors of the lime and grapefruit, intertwining with the spices from the cinnamon syrup, falernum, Angostura bitters and Herbsaint. While the drink begins with a veritable punch in the face of flavor, it mellows over time as the crushed ice melts and becomes downright pleasant. This is one of my favorite tiki drinks as it has just about everything that's good about the '34 Zombie while having slightly less fiddly measurements and a slightly smaller amount of alcohol.

A small word on ingredients. Obviously, LH151 is a necessity. After a question on Ta-Nehisi Coates' blog, I tried making a Jet Pilot with Cruzan 151 as the Puerto Rican rum and Lemon Hart 80 as the Demerara. It was... O.K... but really not up to snuff. Acceptable in emergencies, but not really worth it now that the LH151 flows freely again. With the Jamaican, this is not the place to use your smooth, well-aged sipper. As with the Zombie, Appleton V/X is probably your best bet here, though if you want to punch it up a bit, subbing in 1/4 oz of Smith & Cross might not be amiss. Likewise with the Puerto Rican, something decent but not decadent like Flor de Caña 7 Year, Bacardi 8 Años or Ron Abuelo 7 Años should fit right in. I really prefer falernum with a bit of punch and the erstwhile Mr. Reynold's Dark Falernum really fits the bill. Lastly, the recipe calls for Pernod, but any absinthe substitute or heck, actual absinthe, will do just fine. You really don't need a lot, so an eye dropper is not out of place here.

And just for fun, I also translated the Jet Pilot into a bourbon drink.

1 oz Bulleit bourbon
1 oz Elijah Craig 12-Year bourbon
0.5 oz grapefruit juice
0.5 oz lemon juice
0.5 oz cinnamon syrup
0.25 oz orgeat
0.5 oz dark falernum
1 dash Angostura bitters
6 drops Herbsaint
This was a tricky one to make. The most obvious difficulty is finding something to stand in for LH151, both in terms of flavor and plan alcoholic strength. Sure, there's HazMat-level George T. Stagg 144-proof bourbon, but that's both expensive and nearly impossible to get your hands on. Booker's bourbon is up at a slightly less stratospheric 126-proof, but is also a bit on the pricey side for dumping into a rather complex cocktail. So Weller 107 will have to do, but proportions had to be slightly altered to compensate. The other tweaks were swapping in lemon juice for the lime, as I find that lemon juice fits with bourbon a bit better, and adding a bit of orgeat to smooth out the drink. Overall I was pretty happy with the results. It doesn't have quite the same punch as the Jet Pilot, but the bourbon manages to hold its own and integrates quite nicely with the other flavors.
Posted by Jordan at 10:18 PM