Whiskey Tasting: What Rye Does for Bourbon

Inspired by a post over a Chuck Chowdery's blog, I roped a few friends into a whiskey tasting this afternoon.

As per Mr. Chowdery's post, the plan was to taste through a selection of whiskies that would let people get a sense of how rye content affects the finished flavors. In picking the whiskies, I tried to keep the age and proofs roughly comparable, though it was somewhat limited by the fact that I wanted to select whiskies already on my shelf. Lastly, I wanted to go with bourbons that I felt like were good values, in case people wanted to buy a bottle of their own. 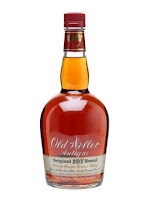 To open, I talked a little bit about bourbon, explaining its definition as containing at least 51% corn in the mash bill. The first bourbon on the list was a wheated bourbon, to see what a bourbon without any rye tastes like. The most famous wheated bourbon is the ubiquitous Maker's Mark. For this tasting I picked Weller Antique 107, a rather nice example of the genre. It has a fairly standard bourbon nose, with an extra touch of cinnamon sugar. The taste also follows a fairly standard bourbon mold, with the addition of a bit of wheat and a fairly healthy dose of black pepper. This is interesting as I tend to associate peppery flavors with rye, but they clearly must be coming from another part of the production. This whiskey was fairly well received, though a number of people mentioned that they found the proof a little overwhelming. Thankfully it handles water fairly well and can be brought down to a more manageable point.

The next bourbon up was Buffalo Trace. As I mentioned in my last bourbon review, this whiskey has about 8% rye in its mash bill and is thus somewhere in the middle as far as bourbon rye content goes. The BT has a slightly lower proof and was somewhat gentler on that front. I pointed out the chili pepper notes that are associated with rye, though it was a bit tricky to explain the difference between pepper flavors and the chemical burn from the alcohol.

Third came Old Grand Dad 114. This was also previously reviewed in the same post as the BT, if you want more complete tasting notes. Here I wanted to emphasize the rather full-throated blast of chili pepper spice from the rye that is sustained even after watering the bourbon down to a more manageable proof. Additionally, I mentioned how the sweet vanilla tended to come out more strongly as the proof was reduced.

The last whiskey was a rye, Sazerac 6 Year. I explained how rye whiskey is defined as having at least 51% rye in its mash bill. This is just over the line as a rye whiskey and thus contains a lot of bourbon character while still emphasizing the rye flavors. Though palates may have been a bit worn by this point in the tasting, the Sazerac got the best reception of any of the whiskies. The fact that it manages a good balance between corn sweetness and rye spiciness makes it a great sipper, as well as having a slightly more friendly proof.

All said and done, this tasting went pretty well. I learned a few things about how to lead people through whiskey flavors and also how much more I have to learn about doing so smoothly and in an engaging fashion. Everyone enjoyed themselves and there was a lot of good conversation about the history of whiskey, especially about the effects of Prohibition. I'm really looking forward to getting people together again for another tasting, both because I enjoy sharing what I know and for the good company.
Posted by Jordan at 10:48 PM