While I'm almost a complete neophyte to the world of wine, I've slowly been dipping my toes in through the back door of fortified wines. While my interest was originally in aged olorosos, as my palate has changed I've become more intrigued by the lighter fino and manzanilla styles. While pursuing Portland Wine Merchants store in search of sparkling wine, I noticed some extremely cheap manzanilla that was highly recommended by the owners. I was willing to take a risk for $5 and purchased a bottle.

Barbadillo is a sherry bodega located in the seaside town of Sanlúcar de Barrameda, one corner of the "Sherry Triangle" along with Jerez (the corruption of whose name gives us the English word sherry), and El Puerto de Santa María. The bodega's history stretches back to the early 19th century and the company has remained under family ownership for nearly 200 years.

Manzanilla sherries are a variety of fino sherry that is produced exclusively in Sanlúcar de Barrameda, absorbing salty flavors from the sea breezes. Additionally, the moderating influence of the sea on the local climate means that the layer of flor that prevents oxidation of the sherry can survive year round, giving manzanillas a fresher flavor than other finos. This particular manzanilla is interesting in that it has been aged longer than usual, clocking in around 8 years under the flor.

Taste: thin and moderately acidic up front, becomes richer near the back of the mouth with olive and white wine notes

My notes are from tasting the sherry while it was fresh out of the fridge. As it warmed up I noticed that the nose got more heft, but the palate got even thinner. I'd probably recommend drinking it chilled, but your mileage may vary.

For all the talk of fino and manzanilla sherries being delicate and not lasting too long, even when stored in the fridge, I found that this sherry was just as robust after a week in the cold as it was when I first opened it. Apparently some people agree with this assessment, so I wouldn't worry too much if you can't finish a bottle in one sitting.

And, as always, I wanted to try making a cocktail. Poking around the internet, it looked like tequila and sherry went together particularly well. 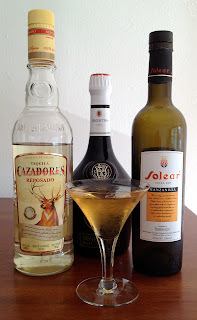 Overall, I think this is a really great way to showcase what manzanilla sherry can do in a cocktail. The tequila, Bénédictine and bitters enhance and wrap around the sherry's flavors, bolstering it where there's weakness and amplifying what's already there. I based this drink on Camper English's Del Rio, which differs primarily by using elderflower liqueur instead of Bénédictine. For being the main component, the tequila actually takes a supporting rather than a lead role in this cocktail, giving a subtly accented canvas for the other ingredients. Overall I'm really pleased with the savory/sweet balance of this drink.
Posted by Jordan at 2:44 PM