While I've put up a review of Talisker DE before, that was from a dram at a bar, so I didn't get as much time to spend with the whisky as I would have liked. Fortunately I managed to get a bottle of the 2011 release and have finally got around to properly tasting it.

Talisker is the only distillery on the island of Skye. The island lies off the northwest corner of Scotland, between the mainland and the isles of Lewis and Harris. While the temperatures are extremely temperate due to the moderating influence of the ocean, the weather is anything but, regularly lashing the island with wind and rain. The distillery was built nearly two hundred years ago in 1831, having since changed hands a number of times before ending up in the Diageo portfolio. Talisker's whisky is known for having a moderate (~20 ppm) level of peat as well as a heavy dose of pepper and some maritime characteristics.

The 2011 release was originally distilled in 2000, making it roughly an 11 year old whisky. As with all of Diageo's Distiller's Edition whiskies, it was aged in a fortified wine cask for an indeterminate amount of time (more info, please, Diageo) after some period in standard ex-bourbon barrels. In this case, the whisky was finished in Amoroso sherry casks. Amoroso sherry is a mixture of dry Oloroso sherry that has been sweetened, usually with Pedro Ximenez sherry. This is similar to the East India Solera sherry that I reviewed a while back. 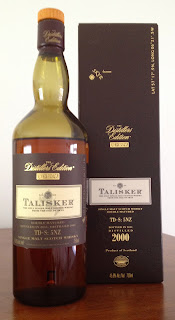 Taste: malty, sugary sweetness up front, pepper comes on strong early on the tongue and maintains its heat, peat builds slowly towards the back of the mouth, sherry comes in mid-palate, becomes earthy, trending towards bitter mocha. After a few drops of water, the whisky gets a little bit less sweet up front, but sweeter at the back, and everything but the pepper is slightly toned down.

This is very different from the barbecue-heavy, peat-forward version that I tried back in December. The nose is very, very floral, with the peat taking on a more vegetal rather than smoky aspect. It makes me think of what Aberlour 12 would taste like if the distillery used peated malt. Also similar to Aberlour, the sherry influence is relatively subdued, providing some underlying fruitiness, but not dominating the other elements of the spirit. I prefer the peat-heavy version, but this is a rather interesting study in how much variety can come from a single distillery, even when they're nominally trying to produce the same whisky each time. It'll also be interesting to compare this to a small bottle I have of Talisker DE that was distilled in 1992, which will be part of a Talisker vertical tasting that I have planned.
Posted by Jordan at 11:03 AM