On Blogging and Taking a Break

As some of my regular readers may have noticed, I haven't been posting for about a month. Around the end of March I felt my motivation to keep up a regular posting schedule slacking. By the beginning of April I just gave up entirely. While I had plenty of things to say, the desire to get them written up just wasn't there. 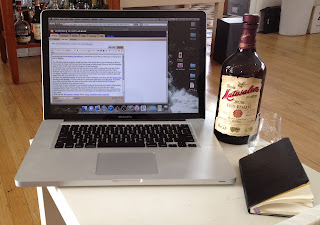 So I decided to take a break. It's been kind of liberating for the last month or so to focus on drinking because I felt like having a drink, rather than picking things with an eye towards cranking out enough posts. I took a few pictures of cocktails and then just took a pass on writing any tasting notes. They were, pretty much without exception, tasty cocktails that would have been good to share, but I just couldn't seem to be bothered. I've also been continuing my quest to knock down my stock of open bottles and have finally reached the point where I've made a pretty good dent in it. I even made it through an entire bottle of single malt whisky without writing a post, which was honestly kind of nice (and turned out to be for the better because the second half of the bottle was better than the first half). Because of all that, I shuffled around my liquor cabinet a bunch of fill up and make better use of the space.

At the same time, I've been having some great conversations via social media. Twitter and Facebook continue to be full of people who enjoy talking about booze and I've happily dived into some extended conversations, which has mostly satisfied my desires.

With all that said, I'm finally feeling the urge to start writing again. There are some good posts in the works that I'm looking forward to talking about. I think I'll start slow, but it feels like the right time to start flexing my writing muscles again.
Posted by Jordan at 9:41 AM