Tobermory is the only distillery on the Isle of Mull, located in the Inner Hebrides off the west coast of Scotland, directly across the Firth of Lorn from Oban, and north of the islands of Islay and Jura. The distillery was founded in 1798 (as is repeatedly pointed out in their new bottle designs), one of the few remaining distilleries that were opened before the 1823 Excise Act that legalized distilling. Originally known as Ledaig, the distillery had an extremely rough history before falling into the hands of Burn Stewart in the early 1990s. Since then things have been a bit more stable, including a recent major refresh of their whiskies, which are now all bottled at 46.3% ABV without chill filtration. To make things a little confusing, they sell two different single malts - their whisky made from unpeated malt is bottled as Tobermory and their whisky made from heavily peated malt is bottled as Ledaig (I've got a bottle of the 10 Year and will be reviewing it later). 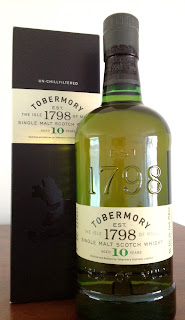 Taste: an interplay of sweet/sour/bitter, sweet malt up front with a bit of sour grape juice, a floral dash mid-palate and into the finish, flowing into bittersweet berries and dried fruit (raisins/figs/dates), vanilla, and oak, with a sour tinge throughout. After dilution it becomes sweeter throughout, with more fruit and berries up front and a healthy dose of pepper and ginger near the back,

While I enjoyed this whisky, I feel like it comes with a few caveats. The largest is that it took a while for me to feel like it had a coherent direction. For being bottled at relatively high strength and being blended together from all first-fill bourbon casks, the flavors were surprisingly restrained at first. This was ameliorated with time - there was much more clear bourbon barrel influence after I had drained about half the bottle, so letting it sit for a while after popping the cork may help. But it wasn't a particularly compelling experience at the start, which made it hard to wade through to get to a point where it became more interesting.

At this point, having just about drained the bottle, I would liken it to a bourbon barrel Glenfarclas - malt-driven, fruity and floral, but without the layer of sherry one finds in regular 'Farclas releases. If it had been like that to begin with, I would have absolutely no hesitation in recommending it. It has great balance and I appreciate the distillery sticking with nothing but ex-bourbon casks instead of fussing around with finishes. But the first half of the bottle felt like a bit of a slog getting to that point. So I will give it a provisional thumbs up. Probably worth seeing if you can try a dram at a bar first before springing for an entire bottle.
Posted by Jordan at 8:02 AM