Glenfarclas is a distillery with a long and tangled history. Begun as a farm distillery in 1836 by Robert Hay, it was purchased by John Grant in 1865, remaining at least family-owned company for the rest of its subsequent history.

That's the simple version of the story, but there are a number of wrinkles. First, after being purchased the distillery was almost immediately leased to John Smith, a situation that continued until he went on to start up the Cragganmore distillery. The Grants took back full control until 1895, at which point they sold a half stake to Pattison, Elder & Co. This proved to be a rocky relationship, as the Pattison brothers were one of the most flamboyant elements of the late-19th century whisky boom. Using creative advertising (see Malt Madness for the crazy details) and borrowing from the capital markets, they built up a large whisky empire. However, when the bubble burst, it turned out that a number of their business practices had been illegal, so they were shipped off to prison in 1898. At that point the Grants regained full ownership of the distillery. Despite going through a major rebuild in 1896, the company was in financial disarray and did not regain a firm footing until 1914 (just in time for WWI to put the pinch on whisky production). While the 20th century was not without its bumps (the late-1960s slow down, for instance), Glenfarclas has done rather well, finding itself as one of the few remaining wholly independent scotch whisky distilleries left.

As some interesting side-notes, Glenfarclas has the largest stills in Speyside, which are also some of the last stills to be heated directly by gas burners rather than indirectly by steam. 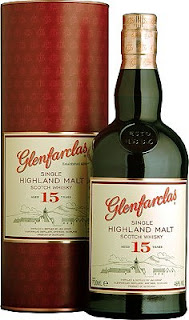 Taste: sweet peppery malt throughout, light prickles of sherry, medium tannins, lots of ginger mid-palate and back. After dilution, it becomes more rounded with only slightly diminished intensity, more bittersweet than sweet overall, the pepper and ginger die down a bit, the sherry is more integrated, and floral notes come out at the end.

I was extremely pleased with the balance in this whisky. Despite another three years in casks compared to the Glenfarclas 12 Year that I reviewed a while back, the sherry seemed less dominant. This resulted in a very balanced whisky, with both maturity and freshness. This may be because the 15 Year has a higher proportion of refill rather than first fill sherry casks compared to the 12 Year, but I'm honestly not sure. Especially since it's also bottled at a higher strength than most of Glenfarclas' whiskies (46% vs. 43%), I would highly recommend this one. While I just got a sample from Master of Malt, full bottles are very competitively priced from MoM and The Whisky Exchange if you can swing a big enough order to keep the shipping costs down.
Posted by Jordan at 7:33 AM