Bladnoch has a number of distinctions - southernmost whisky distillery in Scotland, one of three
remaining active Lowland distilleries, one of the smallest in terms of output (though this is due to contracts, rather than physical capacity) - that make it a very interesting place.

The distillery was founded in 1811 by the McClelland brothers and remained under family ownership until 1938. Its location a short hop across the North Channel from Ireland meant that it received a lot of influence from Irish whiskey distillers, with stints of ownership by the Royal Irish Distillers of Belfast. So it used to operate very much like an Irish distillery, using unpeated malt and triple distillation. The distillery closed during WWII and was revived by new owners at the end of the 1940s, only to suffer further sporadic closures and transfers of ownership.

The distillery was closed in 1993, seemingly for good, during one of DCL/Diageo's periodic rash of closures of their stock of malt whisky distilleries. However, the distillery was once again saved by the Irish, this time in the form of Raymond and Colin Armstrong, who purchased the shuttered distillery as a holiday home. Though their original contract stipulated that the property would never again be used for distilling, they were able to finagle a renegotiation that allowed them to start up distilling again in 2000. However, there was a clause that they would not produce more than 100,000 liters of spirit a year, despite the distillery cranking out 1.3 million liters a year during the 1980s.

One of the most interesting features of the distillery is their whisky school, which lets amateur's learn how to operate a distillery over the course of a few days. I really wish I could do this myself, though it does tend to be a bit on the pricey side. Even if I won't get to do more than take a tour, I'm really looking forward to visiting the distillery this summer during my tour of SW Scotland.

In an effort to get to know the distillery from afar, I trekked to the Highland Stillhouse to try an old bottling of their pre-closure whisky. 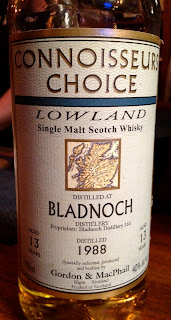 Taste: honey vanilla malt and light sherry influence throughout, a burst of grape near the front, floral tangy oak with a lot of creaminess mid-palate, then big black pepper near the back. After dilution, the flavors become more integrated/less distinct, but the sherry becomes more apparent with a bit of sourness and strawberries at the back.

Despite being bottled at 40% and probably having sat open for years, this whisky was full of flavor. This is exactly what I want a Lowland whisky to be - fresh and malty, a bit fruity and floral, with just enough oak influence to keep it in balance. I could drink this for ages, but sadly one dram will have to do. I'll definitely be keeping my eye out for more Bladnochs, if this one is any representation of what the distillery can do.
Posted by Jordan at 12:27 PM