My last (half) day on Arran dawned damp once again, with heavier rain starting to come down. After wolfing down another Scottish breakfast, I decided to swing by the Isle of Arran Distillery again for a second round of drams, both because there were more I wanted to try (my liver can only take so much in one day) and because the wind was predicted to shift from the south to the west around mid-day. As I was planning on riding south down the Kintyre Peninsula, a crosswind sounded preferable to a headwind.

After packing up and settling my bill, I road the couple of miles down the road to the distillery and plopped myself down in their café once again. Getting through a full flight of cask strength whiskies took some doing, but I managed. By then it was around noon, so I had lunch there as well, to make sure I had enough food in me for the upcoming ride. 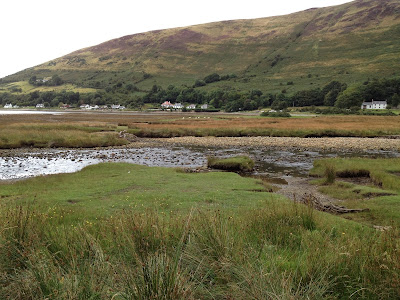 The wind had switched directions, but was still blowing fairly hard when I finally made it down to the ferry dock. Rain was coming down sporadically, but not too badly. I had to wait for a few minutes until the ferry came in, by which time a handful of other cyclists had joined me at the dock. 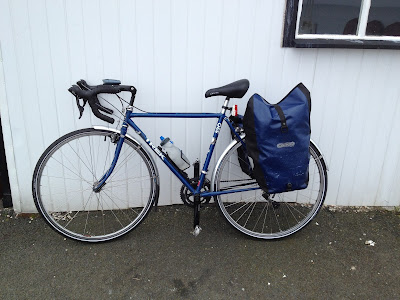 When it arrived, we piled on alongside a few cars for the short trip to Kintyre. I chatted with some of the other cyclists, who were headed to the other side of the peninsula to catch another ferry to the Isle of Gigha. The rain pick up a bit and the wind made for something of a rough ride, but we made it to the other side without incident. 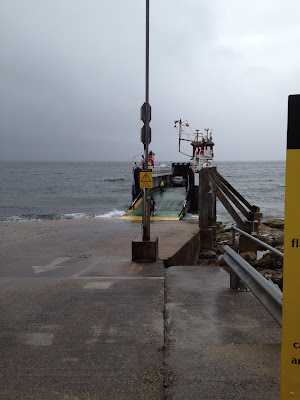 When we finally got to Claonaig, I made a fateful decision. Ignoring James Saxon's advice, I decided to take the B road down Kintyre. My logic was thus: it was ~10 miles shorter by the B road compared to riding across to Kennacraig and back down the west side via the A road, the wind was coming out of the west, so being on the east side would shelter me from the worst of it. Adding to that, the B road is the designated cycling route on the peninsula, so the powers that be thought it was a decent way to go. Oh, how foolish I was...

To put it mildly, the B road is almost all up and down, with sections ranging up to 14% grades. I ended up getting off my bike to walk up them and going down was a sufficiently harrowing experience with cantilever brakes and 40 pounds of gear that it's not something I would care to repeat. While the road itself was in reasonably good shape, it was single track most of the way and cars passed me on average every 5-10 minutes, which made for a lot of tricky negotiation. Thankfully almost all of them were very polite, but one never knows how it's going to go down, so it was fairly stressful. Add into this sporadic rain, which was sometimes fairly heavy, and it was not a pleasant experience.


The only real argument for taking the east side is that there are some great views of Arran from across the water. However, for much of the ride, the road is actually out of sight of the water, passing through forested hills and valleys. 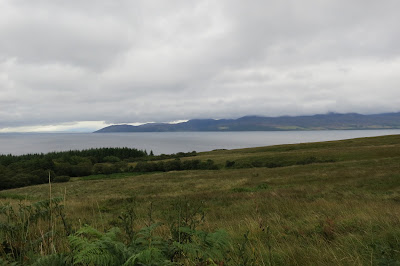 Adding to the fun, the southern end of the peninsula is studded with headlands and bays, which, if you don't have functioning GPS, makes it all too easy to get your hopes up that the next one is the last. I got faked out a few times, such as at Penniver, which had the added bonus of a long climb out of town.

To cap my ride, a soaking rain started when I was just north of Campbeltown. I was getting pretty tired and hungry by this point. I had underestimated the difficulty of the ride, as 30 flat miles wouldn't have been a big deal, but the relentless climbs had really taken it out of me. I had been doing fairly well up to that point, but I was good and bedraggled with only a few miles left to go.

One of the few bright spots during my final push was catching a waft of whisky in the air as I rode by Glen Scotia. I got a bit lost in downtown Campbeltown, but it didn't take me too long to reorient and find Earadale B&B, where I would be staying for the next couple of nights. Jean greeted me at the door and helped me to stash my bike out back. After that I climbed the stairs to find a very snug and well appointed room. 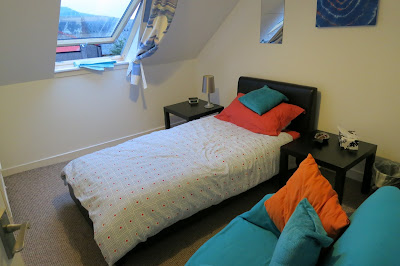 I was pleasantly surprised by the accommodations, as it was also the cheapest room I stayed in during the trip.

After a much-needed shower and change of clothes, I stumbled back outside in search of dinner. The Taj-Mahal restaurant was just around the block and Indian food sounded rather good at the time. The meal was pleasant and reasonably priced, though it was a bit too sweet and underspiced for my liking. Still, there was a delicious piece of naan that was bigger than my face, which went a long way towards making up for all the calories I had burned earlier in the day, so I wasn't too bothered.

After dinner, I wandered around the harbor to let dinner settle before I went to bed. 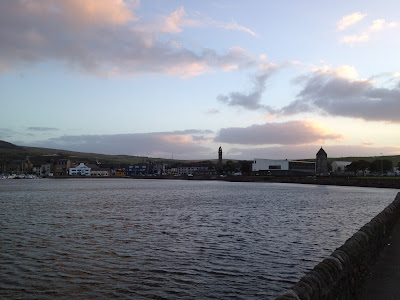 I continued wandering through town as the sun set, almost but not quite getting lost. Finally, I made it back to Earadale and crashed into bed. It had been a long, hard day, but Springbank beckoned...
Posted by Jordan at 8:24 AM