The day dawned cool and overcast, but I was ready to get an early start. Once again, I had scheduled a 10 AM tour at a distillery, though in this case it was just a 2 mile walk down one road instead of a 15 mile ride with lots of navigation.

Breakfast was the full Scottish affair, complete with haggis, which I found to be quite tasty. Castlekirk's dining room looks out over Lochranza Castle, which certainly enhanced the experience. 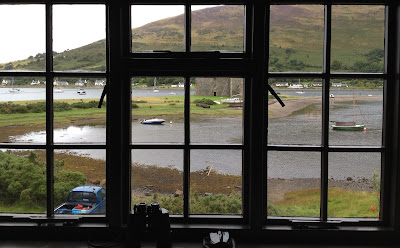 Pleasantly full, I strolled down the road towards the distillery. I passed by the local golf course and a lovely little burn that rolled down towards the bay. A light mist was falling, which made things damp but not uncomfortable. 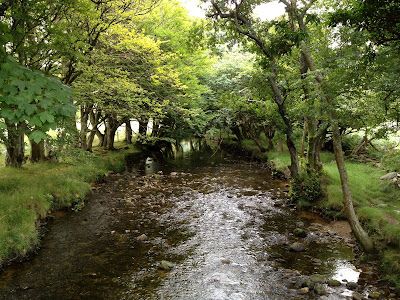 I arrived at the distillery a bit before opening time, which gave me an opportunity to take lots of pictures. 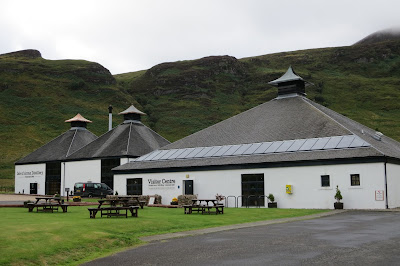 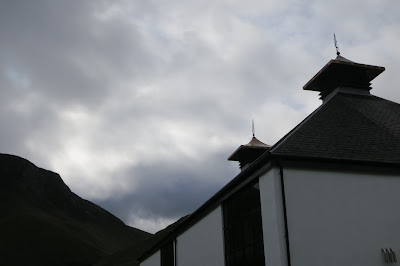 The distillery's setting is absolutely everything you could want - craggy, green hills form a valley leading to the sea, with water flowing by from lochs and burns up above. Though I wasn't lucky enough to see them while I was there, a pair of Golden eagles live above the distillery and are often glimpsed flying in the area. As an added bonus when you're producing lots of flammable liquids, it's also right across the street from the local fire station. 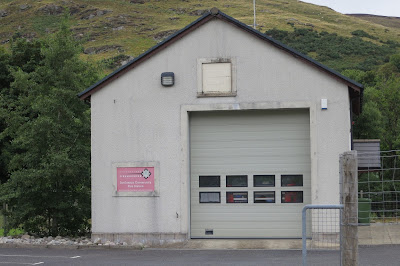 I didn't have too long to wait after the visitor center's doors opened before I was ushered off on the tour by Stewart, our guide for the morning. We began with a short video, introducing the story of the distillery, which was accompanied by a dram of the excellent 14 Year.

We all trooped into Arran's stillhouse, which contains the whole production process from start to finish. All of their malt is shipped in, as the island is too wet to grow good barley. The majority is unpeated malt, with smaller amounts of peated malt (which is blended with unpeated malt to hit a 12 PPM average) and one-offs like their Bere barley project. The two very different kinds of malt require Arran to have a rotating production schedule - unpeated whisky is made for most of the year, then a small number of runs of peated spirit are made just before the quiet season when they can shut down and clean out their stills in preparation for producing unpeated spirit again.

After milling and mashing, the wort is fermented to 6-8% ABV, then piped to their wash still. At 13,000 L, each mash gives enough liquid for several charges of the 7,100 L wash still. The output of the wash still, called low wines, has an ABV of ~23% and is sent to the low wines receiver. The low wines are then charged into the smaller 4,300 L spirit still and redistilled. Three cuts are made: from 80-74% alcohol is the foreshots, which contain lighter compounds like methanol and acetone that are sent back to the low wines receiver for redistillation; 74-63.5% alcohol is the hearts, which are the potable spirit and are sent to the intermediate receiver; lastly, 63.5-26% alcohol is the feints, which contain heavier compounds like fusel oils are also sent to the low wines receiver for redistillation. Arran's tall, narrow-necked stills with flat lyne arms plus the use of condensers instead of worm tubs give lots of reflux and copper contact to produce a relatively light and grassy spirit. 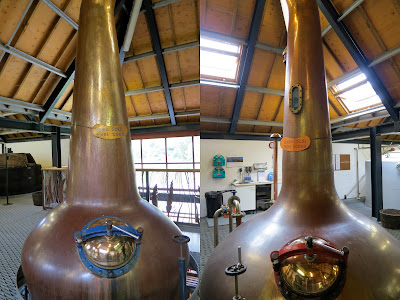 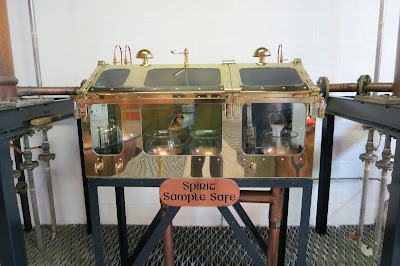 At that point the spirit is filled into casks, primarily ex-bourbon and ex-sherry. Though Arran was an early and vigorous adopter of the cask-finishing trend over the last ten years, they have since backed off a bit, focusing on a small core of finishes that seem to agree with their spirit (port, sauternes, and Amarone wine). However these finishes tend to occur after the spirit has already matured in ex-bourbon casks for about eight years rather than the wine casks being filled right off the still.

The only disappointing part of the tour was that we were not able to see the inside of Arran's warehouses. Only the high end Gold Tours get to go inside and they require group reservations. As I was traveling by myself and there weren't any Gold Tours that day for me to glom onto, I was out of luck. I wanted to be able to do some cask tasting, since I really enjoyed the Arran Sherry Single Cask I reviewed last year, but it was not to be.

After the tour, I had lunch at the distillery - be sure to have a bite to eat if you ever visit as the food is quite tasty. Afterwards I had a round of drams (tasting notes coming later) and periodically chatted with Faye, an Arran employee I had previously talked to via email and Twitter. She was unfailing welcoming while I was at the distillery and asked a lot of questions about my trip and this blog. Being recognized in a land of strangers is no small thing.

After wrapping up my drams, I wandered back down the road and decided to explore a bit around Lochranza. I had originally hoped to ride around the island, but between the long day before and the iffy weather, a walk seemed like a safer bet.


After dinner at a local hotel I decided to make an early night again, since I was looking at a lot of miles of riding the next day to get down the Kintyre Peninsula to Campbeltown.
Posted by Jordan at 8:17 AM