After my tour of the distillery, I trooped down to one of Lagavulin's dunnage warehouses for the Warehouse Demonstration at 10:30 AM (thankfully my Scottish breakfast was still holding strong). This is a tasting of whiskies of various ages straight from the casks led by Iain McArthur, who has been a Lagavulin employee for 40 years and is now the warehouse manager. Instead of burying the lede, I'll just say up front that this was hands down the best tasting I did during my entire trip. If you're going to be on Islay and like peated whisky, this is the one tasting that I would say is a must. It's well done, the whisky is incredible, and the price is an absolute steal at £15.

Lagavulin keeps about 7,000 casks on site and another 6,000 casks in the bonded warehouses at the old Port Ellen distillery. 95% of what they make is destined for single malts and all of it is aged on Islay, unlike its sister distillery Caol Ila, where most of the spirit is taken to the mainland by tanker truck. Iain also mentioned that Lagavulin will regularly use a single cask for up to 100 years over the course of multiple fillings.

While the portions were extremely generous 40-50 mL pours (I actually had to dump a decent number out instead of finishing them), notes are somewhat abbreviated as I was trying to keep up with the progress of the demonstration.

I was, to put it mildly, surprised by how good the new make tasted. Given the setup of Lagavulin's stills, I expected something of a hot mess, with off notes from the heads and tails clashing with the malt core. Instead, it was almost refined and actually quite drinkable. The apple notes were my favorite part, as they were a nice counterpoint to the fresh peat. I genuinely wish Lagavulin would bottle and sell this stuff - I would buy it in a heartbeat.

Taste: thick sherry up front, mildly peaty with apples at the back, a little oak, bittersweet overall, cacao and more oak come out with water

This was, as Iain put it, 'baby Lagavulin'. The sherry casks had added their traditional layer to the spirit, but it lacked the refinement and nuance of older whisky.

This was the essence of a good bourbon barrel peated whisky. The sweet caramel and vanilla were a perfect balance to the rashers of salty bacon and peat. It wasn't subtle, but it was incredibly tasty. I would love to be able to buy a bottle of this.

This was Lagavulin starting to hit its stride. The sherry was much more integrated than in the 9 year old, with some more nuanced flavors starting to come out. The rose notes in the nose were particularly fun and the taste was becoming decadent with the sherry turning into chocolate. 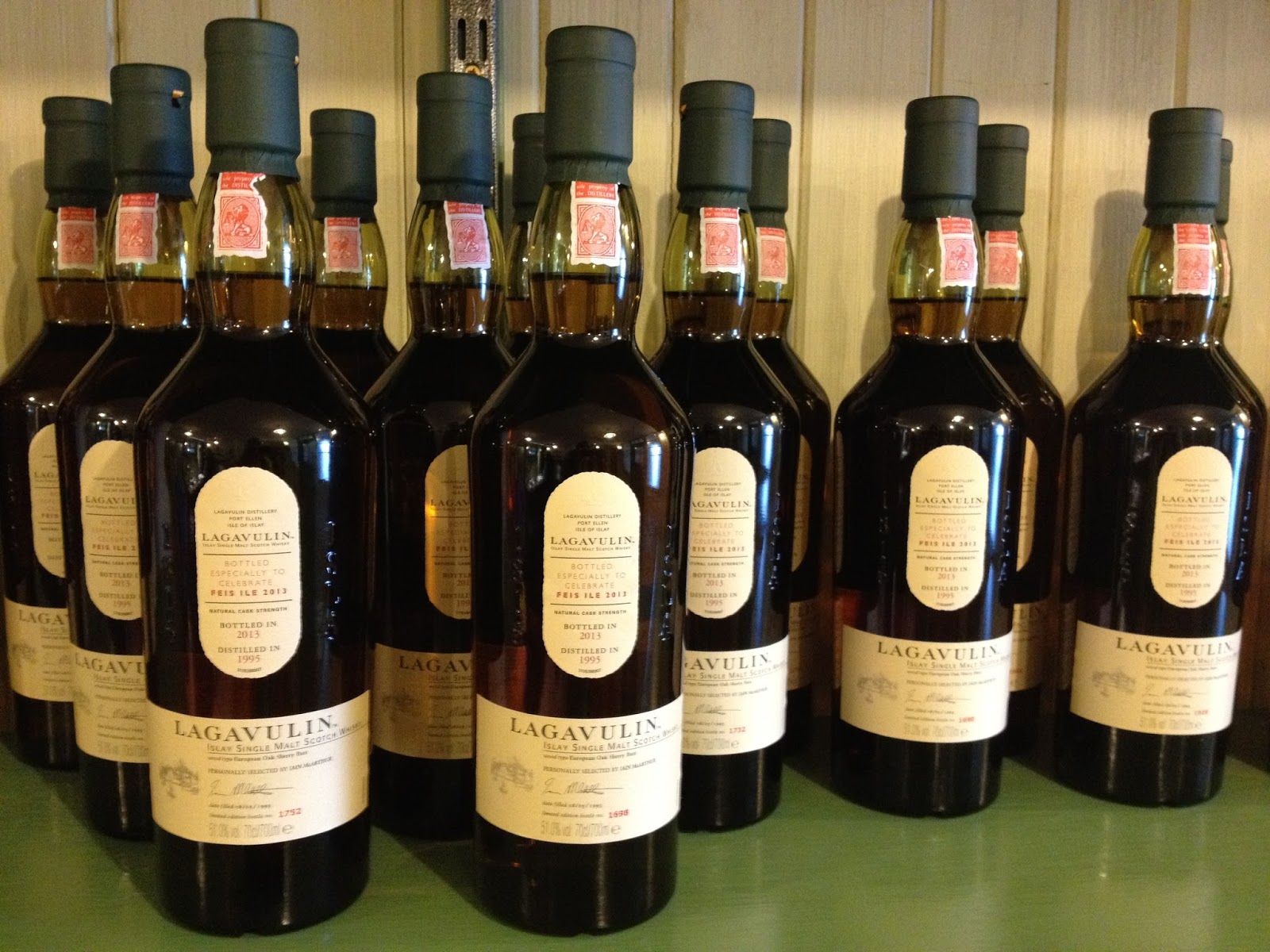 This was a nice, but after the rest of the line-up, less exciting dram. If you like the standard Lagavulin releases, you're almost guaranteed to like this one. So while I enjoyed it, I didn't feel sufficiently attached to it to buy a bottle from the visitor center, both because of the price and (more importantly) because I didn't want to carry around a whole bottle for the rest of my trip. I do wish they had sold a few cask samples as well - I would have snapped up a 200 or 375 mL bottle of any one of the casks I sampled that day. And given the across-the-board quality, I probably would have bought a sample from a cask that hand't been in the line-up.

It's difficult to put into words just how good this whisky was. While it didn't have the traditional Lagavulin sherry, everything else about it perfectly encapsulated the distillery. The cask and spirit were in exquisite balance and most shockingly of all, the huge apple notes from the new make spirit were back, providing a burst of freshness in a rather old whisky. This was easily the whisky highlight of my trip. It blows my mind that the distillery is willing to serve us this alongside all of the other casks for a pretty minimal outlay considering the prices of older Lagavulin releases these days. I consider myself very fortunate to have sampled it, even if it will be nothing more than a memory.

After the demonstration wrapped up, I very carefully got back on my bike for the ride to Ardbeg. I was, to put it mildly, pretty lit from half a dozen cask strength drams, so I was very, very thankful to be riding. If you're getting around by car, it is an absolute necessity to have someone else behind the wheel. It would take hours at minimum to sober up from a tasting of this magnitude.

For another perspective on this tasting only a few days apart from mine, check out the The Pyromaniacs.
Posted by Jordan at 8:26 AM