It was a slightly damp morning when I got up. After wolfing down breakfast, I hopped on my bike and zipped down the road towards my 10:30 appointment at Lagavulin, aided by the stiff west wind at my back. I made there with a few minutes to spare and eventually found a railing where I could lock up my bike. I turned out that I was going to get a nearly private tour, as only two more people were scheduled and they barely arrived in time. Sadly I was told that pictures wouldn't be allowed inside the distillery - a policy that varied widely from place to place and never seemed to have coherent rationals.

Justina took us into the old malt barn, which now serves as storage space for the distillery. Lagavulin did its own malting up until the 1970s, but now gets malt exclusively from Port Ellen at 38 PPM spec. They consume on average 125 tons of malt per week, less than half of what their sister distillery Caol Ila uses. We learned that the Port Ellen malt process takes 2-3 days vs. 9-10 when done by hand. The mechanical malting process involved smoking the barley with peat for ~16 hours, then the malt is checked for phenol content and separated out for their various customers - this suggests that there is a significant amount of variability, even in what is supposed to be an industrial process. Some comes out with a high enough phenol content to satisfy Ardbeg (55 PPM), while some is low enough for Bowmore (25 PPM) - Port Ellen doesn't actually use different processes for the different malts they sell to the various distilleries.

Lagavulin uses a single large (21,000 L) mash tun, which they can charge four times at day when running full tilt. The larch washbacks are roughly the same size, which are rotated roughly every five hours to give them a bit of time to clean things out before the next mash is cycled in. Their fermentation is fairly standard - commercial yeast, 55 hour fermentation ending around 8% ABV. Given that much of Lagavulin's process up to this point appears to be relatively 'standard', I'm going to chalk a lot of its unique character up to its stills (one of the few pictures I was able to get of the inside of the distillery). 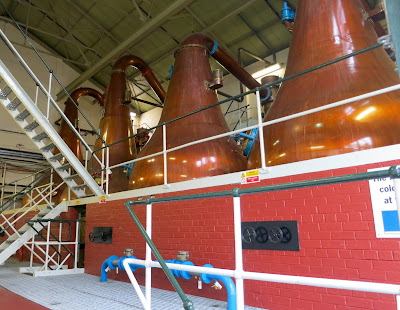 Lagavulin has two pairs of wash and spirit stills, which are built such that they will largely concentrate the constituents of the wash rather than separating them, like many other stills. They are short, squat, and bulbous, with steeply descending lyne arms. Lagavulin also loads their stills nearly to capacity and uses a fairly short foreshots cut (72-70%) - this is also a much lower maximum proof due to the lack of reflux - with a fairly broad spirit cut (70-62%) that dips down into what many other distilleries would consider feints. These features and procedures mean that there is very little reflux or copper contact during distillation, which produces a spirit that has significant amount of both foreshots (fruity esters) and feints (phenols, fusel oils). This gives Lagavulin a significant depth and breadth of character, but also usually requires that it be aged for a fairly long time to really hit its stride, since the esters and fusel oils need time and oxygen to covert into more pleasantly flavored compounds.

Lagavulin is one of the few large distilleries with sufficiently large demand for their single malt whiskies that very little of their output goes into blends - 95/5 seems to be the split I see quoted most often. As an interesting side-note, Justina mentioned that production at Lagavulin had ramped up during the late 90s, which means that stock should be hitting the right age for their standard 16 year old whisky now or in the near future. Perhaps part of the reason why Diageo has decided to hold down prices on an in-demand bottle? Though it doesn't explain the sky-high prices of the cask strength 12 year old and PX-finished Distillers Edition 'special releases' that they put out every year.

After the tour wrapped up, I trooped down to one of Lagavulin's warehouses for a very special tasting. That will be a post of its own, but suffice it to say that it was an experience.

Somewhat tipsy after half a dozen cask strength drams (I repeatedly told people that part of the reason I was biking was that that way I was only a threat to myself), I set off further down the road towards Ardbeg, the last of the Kildalton distilleries on my itinerary. 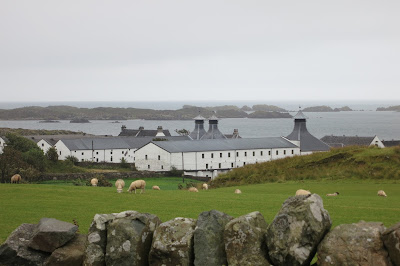 Ardbeg's pagodas peeked out from the gently rolling hills, opening up to another pretty bay, which gave the distillery its name (Ardbeg means 'small promontory'). The distillery is a maze of buildings, all put up at different phases of its life.

The first order of business was getting some food into myself. Thankfully Ardbeg has a nice cafe inside their visitor center, which was rebuilt from one of their old malting kilns. After a pleasant lunch and a chat with a local couple who used to live in the PNW, I set off with a small group for our tour of the distillery.

Neil led us into what used to be one of Ardbeg's malt bins, which are now no long used. We began with a bit of history, describing the ups and downs in the distillery's fortunes. We spent some time discussing recent history - the rescue of the distillery from outright ruin in 1997 when Glenmorangie purchased it and the changes wrought since Glenmorangie was brought into the LVMH fold in 2004. From there we walked through the old malt bins. 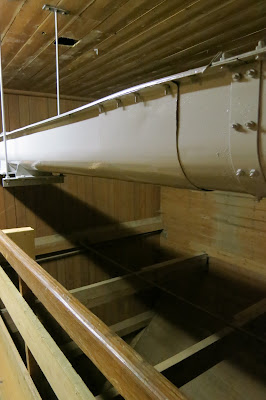 After talking about the difficulties and near tragedies of working in the old kilns and malt bins, Neil made was I thought was the most incisive point of the whole tour - that "there are no stories" attached to the newer, more efficient equipment. Old methods were significantly more labor intensive and produced much more batch variation - for instance, peating used to be assessed 'organoleptically', i.e. by tasting the malt to decide when it was done - but the new equipment has largely removed the human element from the production process. Malt is now purchased at spec (55 PPM) from Port Ellen, delivered to the malt bins by truck, then fed into the mill and mashed automatically. Speaking of their mash tun, Ardbeg is in the peculiar situation of having left their old cast iron mash tun in place, then inserted a new stainless steel one inside it. 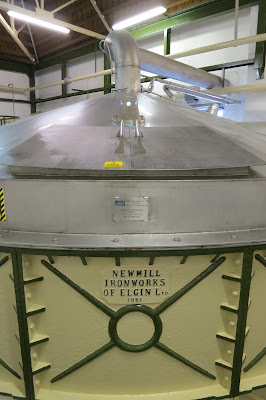 This bothered me a little bit - if you're going to upgrade to stainless steel, then just do it, don't try to hide behind the old façade - but ultimately it's a quibble. However, one nice feature of the new mash tun is that it automatically cleans itself - distillery workers no longer have to climbing inside to wash it out by hand.

Ardbeg does keep one piece of tradition by using wooden washbacks. These are about the same size as Lagavulin's at 23,500 liters. Fermentation has become shorter by about ten hours since the early 2000s, coming down to a more 'standard' 55 hours with a strength of 8% ABV. I do have to wonder if this change has been part of why Ardbeg's spirit has become less complex - there's less time for the yeast to develop flavors, instead focusing on converting the starch into alcohol, which will produce fewer interesting side-products during fermentation. Each washback holds enough wort for two wash still charges - half is taken out, then the second half is removed five hours later after the first wash still run. 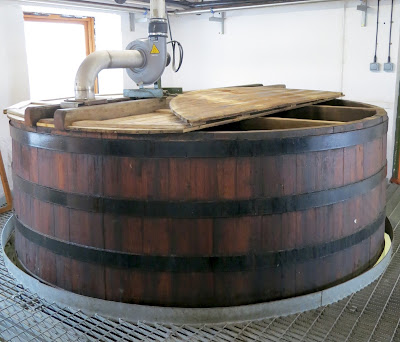 Ardbeg has some rather peculiar stills. To begin with they only have a single pair of stills - one wash still and one spirit still. Second, they are very short stills - shorter even than Laphroaig's tiny spirit stills - which should reduce copper contact. With that said, they still have plenty of capacity - the wash still is 18,770 liters and the spirit still is 16,957 liters. The spirit still actually has more capacity than any other spirit still on the island, with the exception of Caol Ila's monsters. The stills are fairly highly charged - the wash still is filled to 64% and the spirit still to 81%, which should reduce copper contact. However, the stills both have a lamp glass shape and slightly rising lyne arms, which will increase reflux, though this is balanced by the fact that they still have fairly wide necks. To add to this, the spirit still has a purifier - basically a piece of copper pipe that connects the lyne arm back to the pot of the still. What this does is return heavier vapor and anything that condenses in the lyne arm back to the pot for redistillation, effectively increasing reflux. All of this is a peculiar mix, which goes a way towards explaining the particular qualities of Ardbeg's whisky - despite very high peating levels, it isn't necessarily more smoky than Laphroaig or even Lagavulin, with a lot lighter esters and an oily character. 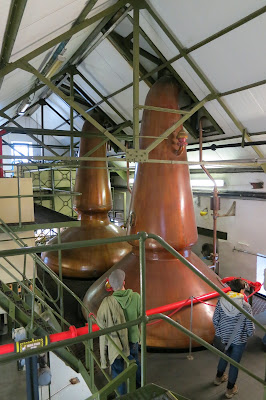 Ardbeg, as with most distilleries, proofs their new make spirit down to 63.5% and fills most of it into first and second-fill ex-bourbon casks. Smaller amounts are filled into sherry casks and French oak casks, for their Uigeadail and Coryvrecken expressions. Displaying the influence of Glenmorangie's Bill Lumsden, a variety of other casks, such as marsala, fino sherry, and French wine casks are also used.

After discussing casks, we went into one of the warehouses for the 'Deconstructing the Dram' tasting. As with the Lagavulin tasting, that will have to be its own post.

Once again fairly tipsy, I departed from Ardbeg. I briefly considered continuing down the road to view the Kildalton Cross, but thought better of it, given that it had been a long day and the wind was still blowing rather hard out of the west. That made for a slow trip back to Port Ellen, but I got there without too much trouble. I made a fairly early night of it, knowing that I had to get most of the way around Loch Indaal the next day.
Posted by Jordan at 7:45 AM