Craigellachie is another Speyside distillery that is known for producing 'meaty' spirit, much like Mortlach. This is usually attributed to being one of the few remaining distilleries to use worm tub condensers, rather than the now more common shell condensers. This reduces the amount of copper contact the spirit has, leaving more sulfur compounds in the resulting whisky. Craigellachie has been difficult to find as a single malt except through independent bottlers, until Bacardi recently decided to up the profile of their malt whiskies.

This whisky was distilled in 1995, aged in a sherry butt, then bottled at 54.3% without coloring or chill filtration in 2014 for K&L Wines.

Thanks to Dave McEldowney of PDXWhisky for letting me sample this. 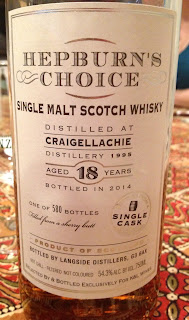 Nose: thick, meaty sherry, raisin reduction, moderate oak, coffee beans, clean malt, vanilla, a bit of elemental sulfur, a whiff of something vegetal or peated, a little rubber, a touch of motor oil, orange peel. After adding a few drops of water, the sherry gains a balsamic vinegar edge and becomes less sweet, letting the oak and dirtiness expand, and some corn/bourbon notes come out.

Taste: opens with bittersweet sherry, flows through malt sweetness, then rising oak tannins, a touch of fresh vegetation, sulfur, and peat, then it leaves with more dirty sherry and malt. After dilution, the malt sweetness is stronger and carries through the palate, pushing the sherry towards the middle, where some floral notes emerge followed by chocolate near the back,

Considering the current vogue for big, bold sherry cask whiskies, this one appears to have been a bit of a sleeper. While there are certainly blogs talking it up (and some who were less thrilled), K&L appears to have plenty left on the shelves. It's possible that people have been scared off by the mentions of sulfur, which as you'll see from my notes is definitely a component. However, I feel like it provides spice to what would otherwise be a fairly standard sherry-driven whisky, keeping it from being unidimensional. Additionally, this was a whisky where I felt like the palate managed to match the nose, which is often not the case. This is one of the few K&L picks I've tried that really hits it out of the park for me, so I'm pretty sure I'll end up buying a whole bottle.
Posted by Jordan at 10:31 AM