Benrinnes is one of Diageo's workhorse malt distilleries for blends in Speyside. Until recently it had the distinction of being one of the few distilleries to use partial triple distillation - the distillery has six stills, two wash stills and four spirit stills that were used in sets of threes. Feints from the wash still and weak feints from the spirit still were redistilled in the low wines still and the foreshots and hearts from those runs were added into the spirit still, increasing the number of times that the feints were redistilled. For a diagram of this process, check out Whisky Science. Additionally, Benrinnes is one of the few remaining distilleries to use worm tub condensers, which reduce copper contact and purported give 'meatier' spirit.

This whisky was distilled in 1991, aged in some kind of cask (if it doesn't say, I'm going to hazard a guess that it was a first- or second-fill hogshead), then bottled 21 years later by the Scotch Malt Whisky Society at 54.2% without coloring or chill filtration. 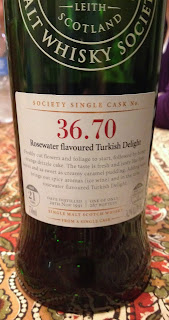 Taste: sweet malt and oak up front, floral/green/berry overtones throughout, becoming more tannic and bitter with vanilla and a touch of sulfur towards the back. After dilution, the malt and oak integrate, the berries notes significantly expand and are joined by fresh apples, oak spices come in around the middle, and the incense and savory vanilla come in earlier.

This is one of the few whiskies I've had where the finish beats out every other component. The cask seems to have been in just the right place to add weight, structure, and aromatic character to the sweet spirit without overwhelming it. This is an example of what bourbon cask Speysiders can be, but so rarely are. However, this was released a number of years ago and is long sold out, so I'll have to content myself with other versions of Benrinnes. After this intro, I'm looking forward to trying more.
Posted by Jordan at 7:24 AM