Park Avenue Liquor in New York is one of the few liquor stores in the US with a long history of bringing in exclusive single cask bottlings. While they don't seem to do as many these days, there are still a few around.

Thanks to Dave McEldowney of PDXWhisky for letting me try this one. 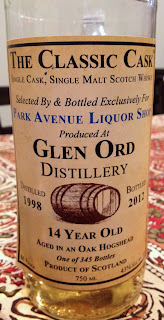 Nose: moderate oak, toffee, orange peel, apple cider, light wood spices (cardamom), vanilla, and raisins - almost sherried, a touch of herbal/grassy/floral/peat character. After adding a few drops of water the sweetness is amplified with more raisin character, the grassiness expands and integrates, a hint of cured meat comes out, and the spices resolve into cinnamon.

Taste: moderately sweet up front, toffee, oak, apple, pear, peach, and raisin in the middle, grassy notes, vanilla, and fresh malt with a touch of cardamom/cumin near the back. After dilution the sweetness grows and expands across the palate, taking on more of the raisin notes, with the grass and spice notes are more muted.

In contrast to the James MacArthur bottling I reviewed earlier this week, this has far more obvious cask influence, despite only being a couple years older. While there is a clear familial similarity between the two, this is an approachable rather than a challenging whisky, with lots of comforting character. That's not to call it boring, just easy drinking. In terms of finding the most nuance, I'm a bit disappointed that this was bottled at 43%, but if I had a whole bottle to drink I don't think that would bother me. This is a plain nice whisky, but unfortunately also long gone.
Posted by Jordan at 8:17 AM