While there is a growing body of IB Glen Scotia releases produced in the early 1990s before the distillery was mothballed for most of the decade, they have generally been bottled around twenty years old. This means that it is harder to get a sense of what the whisky was like at a younger age.

I was able to find this expression from Gordon & Macphail that was bottled in 2003 but sat on the shelf for a dozen years and is, if you care to try it, still available. However, I have some suspicions about its quality as the tube it came in was extremely bleached, suggesting that it had been sitting in the sun for quite some time. I don't know if that was also true of the whisky, but it didn't bode well.

This whisky is bottled at 40%, probably with chill filtration and possibly with coloring. While there is no clear indication, it is probably from a small batch of refill ex-bourbon hogsheads. 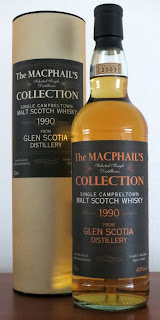 Nose: oily - both organic (olive?) and industrial, Campbeltown malt, a touch of salinity/seashore, leathery oak, cherries/raspberries/, dry hay, cured meat. After adding a few drops of water, the berries recede and are replaced by apple and orange, the leathery quality becomes stronger and integrates with the oily character, while it becomes drier overall,

Taste: malty throughout, sweet opening with wood sugars, passing through apple/pear mid notes and berry top notes, to dry hay, then to leathery bittersweet oak at the back. After dilution the flavors become brighter and it has more well-defined dirty Campbeltown character.

This whisky is an odd duck. While it would seem to suffer from its low bottling strength, it has the peculiar nature that I have observed from other G&M bottlings at low proof of the flavors actually improving after adding more water. Also, it took getting a fair way through the bottle before it managed to unwind - the first 1/2 to 2/3 were intensely leathery in a way that covered up any other notes. But at this point it manages to provide a lighter side of Campbeltown that doesn't cost an arm and a leg. So while I think this is mostly going to appeal to fans of Glen Scotia (all four of us), I think it was a solid buy overall.
Posted by Jordan at 9:11 AM