Bruichladdich 12 Year Second Edition was some of the last entry level whisky released by Bruichladdich that was made entirely from stocks produced before Mark Reynier purchased the distillery and brought it back to life in 2001. The exact provenance is difficult to pin down because the distillery was shuttered between 1994 and 2000 except for a brief production run in 1998, when the team from Jura ran the place using 28 PPM malt. Given the late bottling date on this and the fairly obvious peat influence it's possible that it is composed largely of spirit from that 1998 run as that would have been old enough to use and the pre-1994 stocks would likely have been running thin by then.

This whisky was put together from first- and second-fill ex-bourbon casks and was bottled at 11:46 on May 11th, 2011 with bottling code 11/114 at 46% without coloring or chill filtration. 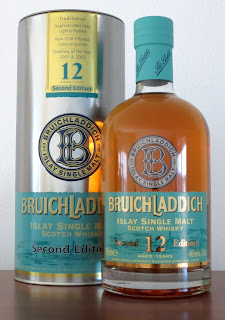 Nose: big bourbon cask notes of vanilla, caramel, and gentle oak, berry esters and pink bubblegum, a touch of peat, salinity, barrel char, putty. After adding a few drops of water the malt becomes drier and pushes the cask influence towards the back, the oak becomes more like cedar bark.

Taste: sweet malt up front, oak tannins move in quickly and turn the malt bittersweet, around the middle - vanilla, herbal/pine, and berry overtones with salinity in the background, fading out through gentle peat. After dilution the oak becomes softer while the berry notes are brighter and move towards the front.

This is one of those whiskies that makes you think "they just don't make them like that anymore". It's not a flashy malt, but it's nearly flawless and deeply satisfying to drink. Unlike much of what has been distilled since it was restarted in 2001, there is none of the butyric funk that mars many current releases. Additionally, the oak is a significant presence that gives the spirit heft without overwhelming the distillery character, unlike many newer Bruichladdichs that seem like could stand to spend more time in first-fill casks. I can only hope that Bruichladdich can return to this style someday when demand has settled down and they're once again able to mature their whisky to a reasonable age, but the comparison between the two 10 year olds makes me wonder if that will really be possible. We'll just have to wait and see.
Posted by Jordan at 8:21 AM