In many ways these two releases bracket the beginning and end of Bruichladdich's first phase after its purchase by Mark Reynier in 2000. The first 10 Year was one of the earliest releases in 2001 under the new ownership, utilizing spirit that was acquired from Whyte & Mackay along with the distillery itself. Even if it wasn't their own distillate, it was meant to establish the distillery's character in the new era.

In contrast, the Laddie Ten was released in 2011 as the first ten year old made entirely from spirit distilled under the new ownership. At that point the distillery was expected to move into a more standard mode with an established lineup composed of 10, 16, and 22 year old bottlings. However, that state of affairs quickly collapsed not long after the distillery was purchased by Remy Cointreau, with the age dated bottles no longer available outside of the distillery shop (and not even available there now) and the lineup reduced primarily to NAS or sub-10 year old vintage bottlings. So while the Laddie Ten did herald a new era, it was extremely short-lived.

Both were bottled at 46% without coloring or chill filtration. The old label 10 Year is a 200 mL bottle that was purchased at the Islay Whisky Shop in 2013 and has a bottling code HW 02/0072, suggesting that it was bottled in 2002. The Laddie Ten was also purchased and opened in 2013, but the bottling code is unknown.

Taste: youthful - but not overly so, sweet malt beginning up front and carrying through to the back, a veneer of sherry and green notes beginning around the middle, very mild oak with a touch of vanilla and peat near the back. After dilution, the sherry character is enhanced and spreads out, there's a burst of slightly raw fruit esters around the middle, and the green notes around the back become a little sour, and the malt becomes grainier.

I can see how this would have been a good representation for the distillery as it tried to rebuild itself in the mid-2000s. Unlike the more wild experiments of Reynier/McEwan era, it's a simple recipe of ex-bourbon casks with a smaller number of ex-sherry casks to give it a bit more pep. It's relatively uncomplicated and youthful, but also without overt flaws. For a drinker not closely scrutinizing the experience, it's pleasant and enjoyable without demanding a lot of attention.

If you live in the US there may still a few retailers that have the original Bruichladdich 10 Year on their shelves and if you happen to stumble upon it, I think it's a worthwhile experience as part of a bygone era, both for Bruichladdich itself and the industry as a whole. 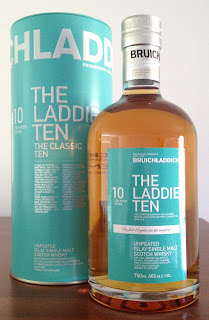 Taste: malt sweetness and wood sugars throughout, salty with bourbon cask berries starting around the middle, earthy/leathery oak tannins and peat near the back. After dilution, it remains similar, but the leathery character is amplified.

Hate it or love it, the Laddie Ten is simply an entirely different whisky. It's not peated in the way that its Islay brethren are, instead making me think of peat that's turning into fresh soil. While it is mature in a way that the original 10 Year was not, without the youthful greenness, it also lacks the clean character that made the previous version such an easy drinking whisky.

Thankfully sometime in the last two years that this sample has sat around the butyric character that I originally found has burned off, which makes it far more drinkable. If I had to pick between the two, I'd take the pre-Reynier distillate any day.
Posted by Jordan at 8:27 AM