Laphroaig - love it or hate it. For some, the long-standing 10 Year release has been an old friend, a wild beast that they keep coming back to. For others, it is so loathed that shots are used as punishment. And I would have agreed with the latter sentiment even a handful of years ago.

While I had made an effort to try whiskies from all the distilleries I would visit during my trip to Scotland before leaving the States I didn't get in any Laphroaig, which meant that it first passed my lips at the distillery. Thankfully by then I was already well into my love affair with peat, so I didn't find the downright aggressive flavors off-putting. But it still took a while to really explore what the distillery has been doing.

When I first tried Laphroaig 10 Year on a cold February night, I was not impressed. It seemed somewhat thin and lacking in oomph. But that was literally the last pour from a bottle at a bar, so who knows how much it had oxidized before I took that first sip.

So I finally got back to basics after buying a couple of bottles when they were mysteriously discounted in Oregon one month a few years ago.

This whisky is aged entirely in first-fill ex-bourbon barrels from the Maker's Mark distillery, then bottled at 43% with coloring and chill filtration. 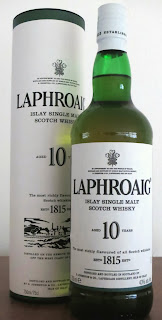 Taste: sweet malt and oak up front, shifts into two layers - ashy and mossy peat on top with growing oak tannins plus continuing sweetness with gentle berry and citrus notes on the bottom, juniper/pine comes out around the back with fresh soil and mossier peat. After dilution the relative places of the components change while the overall character remains similar - the opening has cleaner malt followed by mellow oak, with the peat shifting into more of an undercurrent.

While I've come to enjoy Laphroaig a lot, the official releases from the distillery have so far left me a little underwhelmed. While it seems like the entire point of the distillery is its big, robust spirit, the OBs all feel like they're trying too hard to soften the spirit and cover it up with oak. The 10 Year is less problematic in that respect than Quarter Cask or even recent batches of the 10 Year Cask Strength, but it still feels a little too tame for my liking. Admittedly, that may just be me because even at a reduced strength this whisky has the ability to nearly clear a room with its smell, but I'd still rather have less cask influence. While we're at it I'd love if Laphroaig switched to craft presentation for all their whiskies, but that will likely take a major shock to sales to make them reformulate their admittedly very successful products.
Posted by Jordan at 9:34 AM