While Cambus has acquired a gloss of renown due to being a 'lost' distillery, the mystique seems peculiar given that it was what every other grain distillery has always been: a factory for churning out alcohol. While it is more reasonable to bemoan the loss of malt distilleries with unique characters, the range in grain distilleries seems to be far more limited, as they used very similar production techniques and equipment.

With that said, this whisky was distilled in September 1988, filled into a refill hogshead, then bottled in July 2015 at 48.0% without coloring or chill filtration. 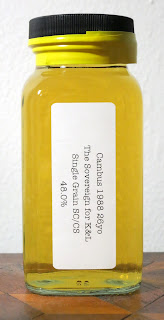 Nose: light grain, unripe apples and pears, tired oak, a touch of hay, lime peel, cinnamon, and vanilla. After adding a few drops of water the lime peel is amplified and joined by lemon, a touch of malt comes through,

Taste: lightly sweet grain throughout, berry overtones beginning early and carrying through, creamy mouthfeel, very little oak at the back. After dilution the grain component becomes stronger and the berries are less pronounced, it's sweeter overall and a bump of baking spices show up near the back.

While without that sample's flaws, this fits into roughly the same mold as the Pearls of Scotland Cambus I tried of the same vintage. There's nothing about this that stands out from any other grain whisky I've sampled, so I'm not sure there's a lot of reason to recommend it. The best character of this is the berry notes on the palate, which might mesh well with a floral malt, but I need to futz around and see.

For all that certain corners of the whisky world are trying to hype grain whisky as the next big thing, very few of them have genuinely impressed me. I buy them largely to further my efforts at making my own blended whiskies, where their lack of strong character can be an asset rather than a flaw. If I get more Cambus it will be one of the sherry casks that should provide some more interest on top of the usual grain character.
Posted by Jordan at 9:16 AM