Until fairly recently, Tobermory tended to fly under the radar. Even now, Ledaig captures more of the attention as malt fans seek peated whisky that isn't wildly expensive (yet). It wasn't helped by the fact that their lineup was rather limited, with only a 10 Year and a 15 Year expression. Further complicating the situation, while the entry-level 10 Year was priced in line with other basic single malts around $50, the 15 Year was wildly out of line with the market at $120 and up. While some of this is justified by the fact that the sherry cask finishing for the 15 Year is carried out at the distillery, which has extremely limited warehouse facilities since they were sold off in the 1970s and turned into apartments, that still makes it difficult to justify a price point nearly double that of most other distillery's 15 year old releases. Yes, it also comes in a very fancy box, but as with many other whisky fans, I would gladly forgo the packaging if it cost me less. I can't drink a box.

This whisky was aged in ex-bourbon casks primarily at Deanston for at least 14 years, then finished in Gonzalaz Byass oloroso sherry butts at Tobermory for at least an additional year, then bottled at 46.3% without coloring or chill filtration. 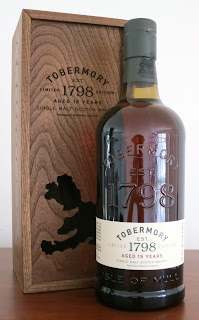 Taste: bittersweet sherry and undergirding oak throughout, muddled fruit-y overtones in the middle, and an herbal malty fade at the back. After dilution the malt becomes stronger at the back.

While I enjoyed this, I felt like the sherry cask finish was too strong for my taste. I might enjoy this expression more if it was constructed like Bunnahabhain with a small percentage of first-fill sherry casks mixed with a larger number of ex-bourbon and refill sherry casks to give better balance between the sherry and spirit. As is, I'm not sure this is worth what I paid for it at closeout prices, let alone at MSRP. While I'll be looking for other sherried Tobermory bottles in the future, I've had enough of this one.
Posted by Jordan at 8:33 AM