While Ireland produces single malts and blends much like Scotland, its unique whiskey is pure pot still. It is made from a mixture of malted and unmalted barley that, as the name suggests, is distilled in a pot still, usually three times like most Irish whiskeys. With one exception, all of these are currently being produced by the Middleton distillery in Cork. It is claimed that the unmalted barley gives the final product a spicier and more full-bodied character, but I never found out until I decided to take the plunge right before the price of this whiskey went up locally.

This whiskey was aged in a mix of ex-bourbon and ex-sherry casks, then bottled at 40%, with coloring and chill filtration. 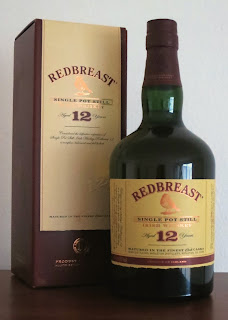 Nose: toasted grain, caramel, muddled fruit/sherry overtones, vanilla, light oak, a touch of something floral. After adding a few drops of water a lot of the complexity disappears, replaced by smooth grain with a savory edge.

Taste: grain and oak sweetness up front, light tannins with vague fruit/sherry/orange peel in the background come in around the middle, with a slight bump of oak, creamy vanilla malt, and baking spices near the back. After dilution it becomes a bit softer and the fruit is largely pushed towards the back.

This is... fine. The grainier notes from the unmalted barley in the mix take a little while to get used to, but after that it's just OK. I kept waiting for some epiphany, since so many people, including many with palates that I know and respect, rave about this whiskey. But it never clicked with me. There are any number of scotch blends that would be as good or better for far less money, so I can't imagine this finding space in my liquor cabinet again.
Posted by Jordan at 9:15 AM