Longrow Red is a series of heavily peated, full strength, wine cask finished whiskies that has been coming out since 2012. While most have been red wines, there have been exceptions such as a port cask finish. Importantly, unlike many finished whiskies, these are closer to double maturations in that the finishing periods range from 1-5 years.

This whisky was aged in refill ex-bourbon hogsheads for 7 years, transferred to fresh Cabernet Sauvignon hogsheads for 4 years, then blended to give an outturn of 9000 bottles at 52.1% ABV without coloring or chill filtration. 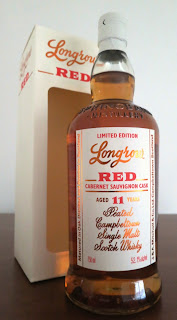 Taste: fairly hot up front with sour & sour wine on top, creamy malt underneath, fade out through oak/wine tannins and dry peat, gently floral at the back. After dilution the heat fades significantly, but the structure remains overall the same except for a bump of extra sourness at the back.

While a little on the hot side, this is a very solid whisky. I wish the wine influence was more integrated, but the finishing period seems to have been long enough to keep it from feeling like something slapped on top of the spirit. The nose is by far the best part, with a good balance between intensity and complexity, especially after it's had some time to breathe in the glass. In contrast the flavors are a little less exciting, without any particular complexity.

Taste: sweet malt and red wine up front, a citric tang right behind transitioning into moderate oak tannins, vanilla, and hard apple cider in the middle, with a bump of peat near the back

While there's nothing wrong with this strength, it's a sort of unsatisfying middle. It doesn't have the intensity of full strength, but also doesn't have the extra peat that emerges with even more dilution. Additionally, the sourness in the aromas somehow seems even more assertive than at full strength, which makes it less pleasant than it would otherwise be. With that said, the hard apple cider character that emerged after the whisky had been in the glass for a while was really interesting.

Nose: lots of classic Longrow peat, woodsy/pine, rather dry - more savory than sweet, red wine underneath with some ripe tomato notes, clean malt and oak in the background, a little bit of vanilla

Taste: balanced malt and red wine sweetness up front, becomes more savory with tomato notes in the middle, peat and syrupy oak at the back, and vanilla and berries on top throughout

While dilution takes away most of the heat, it doesn't diminish the intensity of this whisky. It was a pleasant surprise to find out how much stronger the peat is at this strength, even if it loses a little bit of complexity. I think I prefer it at full strength, but it would be quite welcome at 46% when I'm looking for something more easy-going.
Posted by Jordan at 8:00 AM