Glen Keith was practically a new distillery in 1971. What had begun as a Lowland-style distillery practicing triple distillation with three stills in 1960 had been transformed into a more typical Speyside distillery practicing double distillation with five stills in 1970. Beginning what would be a long history of experiments at the distillery, those five stills were the first gas-fired stills in Scotland, as opposed to the then-traditional coal-fired stills. A few years after that they were converted to steam coils (that sounds like a lot of money down the drain, but someone at Seagrams thought it was a good idea). Up until 1976 Glen Keith produced its own malt using a Saladin box, which is interesting but may not have been wildly different than drum or other mechanical maltings compared to floor malt.

This whisky was distilled in December 1971, filled into a sherry butt, then bottled in January 2005 at 50.8% without coloring or chill filtration. 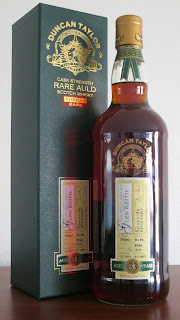 Taste: syrupy sweet with a tart ethyl edge up front, dank sherry with rising oak tannins and orange liqueur starting in the middle, more floral/malty/bubblegum going into the finish. After dilution the sweetness is slightly toned down but also spreads out to bring the oak more into balance, with just a bump of sharper tannins and more savory notes at the back.

Even more so than the slightly older Duncan Taylor Bruichladdich I reviewed, this is absolutely a first-fill cask judging from the almost opaque color, massive sherry influence, and overwhelming oak tannins. It's a massive whisky in almost every sense, taking well over half an hour in the glass before it unwinds enough to reveal some complexity. It's taken quite a while to very far through the bottle because I have to be in a very particular mood to enjoy what this has to offer.

Again, like the Bruichladdich I have to wonder if this cask would have been better of blended with a similarly aged inactive bourbon cask so that the sherry and oak could have been brought into balance and enhanced with some more ester-y character. While there's more going on if you're patient enough, I'm not sure the good things about this malt would have been diminished with some careful blending.

Taste: opens with moderate honey sweetness joined by a slightly charred oak note underneath everything, juicy sherry with vanilla and citrus peel comes out around the middle, then it turns bittersweet towards the back with some oak tannins

While it still took a while in the glass for this malt to unfold, the aromas are the real star of the show here. Reducing the strength opens up the nose and provides a lush, evolving experience. In contrast, the flavors and finish start out relatively simple, only slowly gaining some of the complexity and subtlety of the nose.

For a different take on this malt, see Serge's review, though it took him two tastings to really warm up to it.
Posted by Jordan at 7:00 AM