1969 was an interesting year at Bruichladdich - they had been purchased by Invergordon Distillers the year before and would go on to continue the expansion that had begun in the early-60s with the cessation of on-site malting. That means this whisky was distilled on Bruichladdich's original two stills, but it was made with industrial malt.

A more personal factoid is that this is the most expensive whisky I have ever purchased. It seems like small potatoes in this day and age since it only ran me a little over $200 when I purchased it in 2013, but I was on a grad student budget so it felt like a lot of money.

This whisky was distilled in May 1969, filled into a cask (more guesses about exactly what kind later), and bottled in June 2003 at 46.8% without coloring or chill filtration in an outturn of 147 bottles. 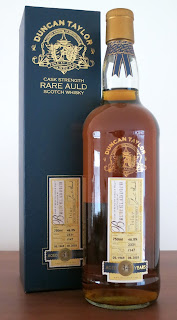 Taste: bittersweet sherry up front, background oak tannins around the middle, undercurrent of malt and vanilla throughout that emerges a little more around the finish alongside some trademark Bruichladdich character. After dilution the sherry becomes a little softer and more in balance with the malt, and some surprisingly youthful green character comes out.

Finish: balanced sherry, oak, and malt, with some lingering cardboard and heat

Judging from the relatively small number of bottles and the depth of the sherry influence on this whisky, my guess is that it was a first-fill American oak sherry hogshead. While this is likely to please fans of sherry-driven malts, I'm not sure that three decades in the cask did anything for this whisky that couldn't have been found if it was bottled in its teens. While not lacking in intensity, it doesn't have a lot of the added complexity need to balance out the reduced punch that it might have had above 50% ABV.

I suspect that this would have been better off going into a small batch release where it could have been blended with a more inactive ex-bourbon cask to get some of that ester-y complexity alongside the sherry character. But since I don't have any old bourbon cask Bruichladdich, that experiment will have to be done by someone else.

Taste: rather bitter throughout - muddled sherry, malt, and oak

Wow, that was not great. While the aromas remain pleasant if soft, the palate and finish completely fall apart into a bitter mess. I was curious if this would have worked in the old G&M style, I think it's clear that this wouldn't have worked at anything less than cask strength.
Posted by Jordan at 7:00 AM