Despite having some samples in the back of my cabinet for the better part of a decade, Glencadam is one of those distilleries that I've managed to not experience yet. As usual, I will leave most of the history to Malt Madness, but there is one relevant wrinkle here.

Glencadam is one of the few remaining independent (major) distilleries in Scotland, having been purchased by the blender Angus Dundee in 2003. This was after Allied had mothballed the plant in 2000 and laid off all of the employees but one as surplus to requirements. Because the gap was relatively short, they have taken an approach more similar to Glendronach in maintaining a full age stated lineup. The 10 Year was introduced with a new label design in 2008 along with an upgrade to full craft presentation.

This whisky was aged in ex-bourbon casks (probably refill, given the lack of color), then bottled at 46% without coloring or chill filtration on June 25th, 2009. 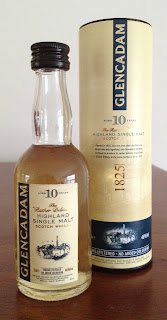 Taste: clean malty sweetness up front, kind of green/new make-y with citrus/fruity/floral overtones and vanilla undertones in the middle, then gently bittersweet grain with more floral notes going into the finish. After dilution it becomes softer and sweeter, but the green notes in the middle largely fade.

This is right on the edge of being too immature for my taste. To a degree I commend them for being willing to put out a more 'naked' malt without any fussy casks, but I do wish the wood had been a bit more active. They clearly have some respectable if not remarkable spirit, so I can imagine it becoming better with more time.

As a small note, I was a bit worried when I got this miniature out because the fill level looked low, but between the picture I took immediately after purchase and on other sites selling these miniatures, it looks like that's just the fill point for Glencadam. A bit odd, but no harm done.
Posted by Jordan at 9:06 AM