Sort of like how the 17 Year was created when Ardbeg was revived, the first release from Glencadam after its purchase and restart by Angus Dundee was a 15 Year. This may have been because of the brief shutdown of the distillery between 2000 and 2003, leading to them trying to build up younger stock to ensure future releases, though I can't be sure.

Perhaps a bit behind the times, the 15 Year was originally bottled at 40%. When they introduced the 10 Year in 2009 they revamped the line at 46% and renamed the 15 Year "The Rather Dignified". I guess we'll see if it lives up to that.

This whisky was aged in ex-bourbon casks, then bottled at 46% without coloring or chill filtration on July 1st, 2009. 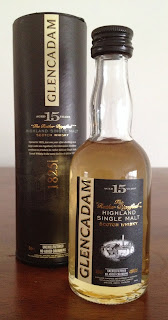 Nose: good balance between clean malt, gentle dusty oak, a little caramel, mixed fruit (berries, apples, pears), and light vanilla. After adding a few drops of water it gets kind of muddled, the alcohol is more overt, and the aromas shift towards the casks.

Taste: sweet malt with unripe apples and pears up front, rounded sweetness in the middle that fades out into gentle bittersweetness with some oak tannins. After dilution it gets kind of watery and hot without any development.

While this is honestly more what I expected the 10 Year to be, it's really rather generic. While it is 50% older, I also suspect that there are some more active casks in the mix. At the same time I'm not sure this achieves much more than a competent Speysider. I appreciate that they stuck with ex-bourbon casks, which was somewhat uncommon even at the time when at least a touch of sherry was fairly standard. Something closer to the similarly aged Balblairs I've sampled could have pulled me in, but this isn't more than decent.
Posted by Jordan at 7:30 AM