A few months back, I was kvetching about the lack of high-proof gins available in the US. While that still bugs me, I decided to take a page out of Jeffery Morganthaler's book and make my own.

My recipe diverged a bit from his, mostly because I was trying to make something akin to Plymouth Navy-Strength gin. There are seven listed botanicals in Plymouth and I was able to get all of them from without much trouble. For anyone in the Portland area, Limbo, off SE 39th & Holgate, is an absolutely fantastic place for getting herbs and spices. 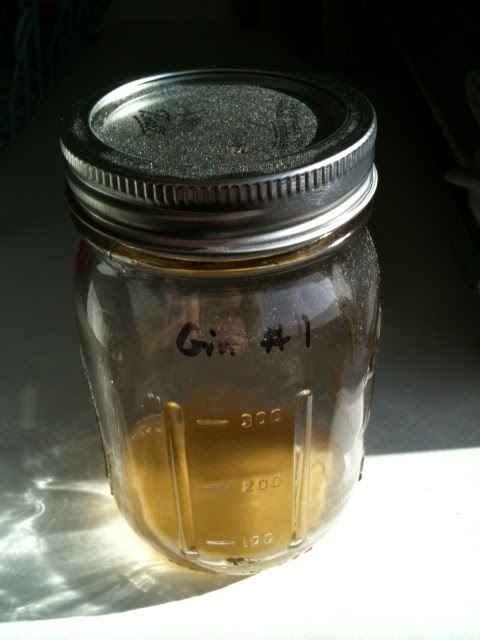 For something where I was fudging a lot of the measurements, this turned out rather well. I probably could have filtered it a time or two more, largely because of the powdered orris root (I need to find it in unground form at some point), but it's no big deal. The orange and lemon tinctures were also shortcuts because I happened to have them on hand, but a couple of strips of orange and lemon peel (without any white pith) would work just about as well. This recipe used a mixture of Everclear (95% EtOH) and water, but 100-proof vodka will work too if you can't get your hands on the former. Ultimately I'd like to try making batches at different proofs to see how the flavor profile changes depending on the extraction efficiency of various flavor compounds.

Much like Morganthaler's recipe, this is entirely provisional. I was aiming for a particular set of flavors, but you should feel to adjust it to your own tastes. A lot of his suggestions for additional spices to try are good and I would add cucumber to that list if you happen to like gins such as Hendricks or 12 Bridges. Also, this wasn't a particularly juniper-forward gin, so if you want more of that evergreen snap, you should add some more.

In no small measure, my ultimate reason for wanting to make high-proof gins came from an article on Oh Gosh! about a gin-based tiki cocktail, the Winchester. Since it's a) hard to find and b) a bit spendy, I've yet to plonk down the cash for a bottle of Martin Miller's Westbourne Strength gin. While my own version doesn't have the visual clarity, it is certainly up to proof and then some. In trying to make my own Winchester, I had to make a few substitutions due to other missing ingredients, but the final product was pretty good. 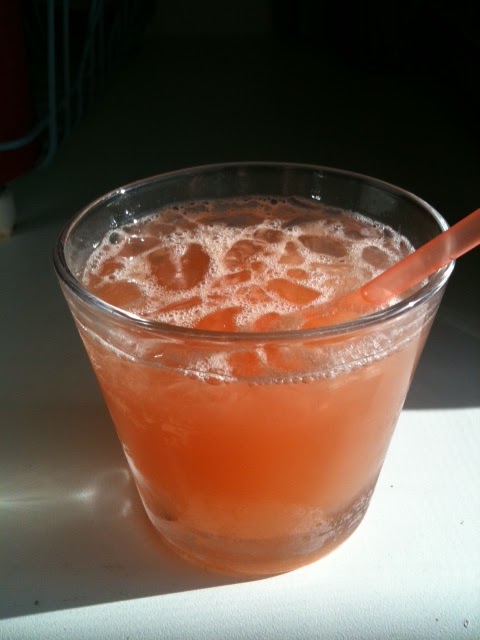 Combine all ingredients, shake with lots of cracked ice and pour unstrained into a chilled single rocks glass or tiki mug.

If you haven't glanced at the original Winchester recipe yet, I'll fess up and point out that I had to sub just about every ingredient on the list, except for the juices and syrups. I also eased up on the Old Tom, both because of the higher proof of my experimental gin compared to the MMWS and because the Ransom Old Tom has an awful lot of cardamom, which can easily overpower a drink. I also don't have any St. Germain (yes, I am a terrible cocktail blogger). The Yellow Chartreuse was the most floral liqueur I had on hand, so in it went (probably bumping up the alcohol content of the drink a bit as well). Combined with the Hendricks, which is a rather floral gin, the overall flavor profile is hopefully reminiscent of, if not exactly the same as, the Oh Gosh! recipe.

This is quite a powerful drink, both in terms of alcoholic strength and flavor. There was still a lot of cardamom (I might bring down the Ransom a bit more and sub in some Plymouth if I was making this again), but the ginger bite, floral and herbal flavors from the gins and liqueur still made themselves known. I actually forgot to add the Angostura bitter straight off and had to add them later, but the drink has a fairly similar flavor profile even without them. The bitter simply accent what is already present and give the drink a bit more snap. The other elements tend to play supporting, but still important roles, with the grenadine and lime balancing each other and providing a nice fruity roundness and the grapefruit adding it's own bitter character to that of the gin.

It's been fun to explore the realm of non-rum-based tiki drinks and I'm hoping to get to more of it in the future. While rum will always be my main love, there's plenty of tasty drinks to be made with other base spirits.
Posted by Jordan at 7:07 PM