Silver or Gold: A Comparison of El Espólon Tequilas

El Espólon tequila has made a fairly recent reentry to the American market, this time with some rather attractive bottle designs. I first stumbled upon the brand while looking for a reasonably priced reposado tequila to supplement the tasty but somewhat pricey Corralejo on my shelf. Tastings.com reviewed it quite favorably and a local store had recently started stocking it. With a quite reasonable price point of $27 for both the blanco and reposado bottlings, I was pretty much sold.


The younger of the two bottlings, this tequila is crystal clear. On its own or in a more delicate drink like a margarita, there is an undeniable harshness to this spirit that I find somewhat off-putting. Either because of the roasting process or the hearts cut being started a wee bit too soon, this just isn't quite as smooth as I would hope for from a spirit that markets itself in the 'premium' category, no matter how debased that adjective may be these days. Underneath that less pleasant layer, there are significant amounts of agave flavor coupled with somewhat indistinct fruit flavors. Thus, while it makes a reasonable base in drinks with other strong flavor components, I don't think that it's sufficiently refined to be the anchor in simpler drinks. Here's one example where I think it works fairly well, a margarita variation with cinnamon syrup and falernum providing a one-two punch of flavor to balance the blanco tequila's assertive nature. 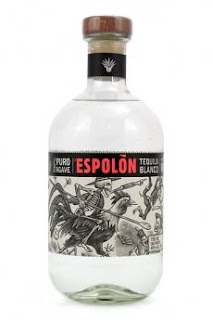 This is unfortunately going to be a little tricky to make. Unwilling to pony up for Gran Marnier or Cointreau, I turned to the Homebrew Underground's Orange Kumquat liqueur recipe. After making my last batch, which would have produced more than a liter of finished liqueur, I decided to not add any sugar syrup and essentially make liqueur by adding the proper amount of simple syrup each time to make it in situ for each drink. What this also allows for is substituting in different syrups instead of regular ol' simple. So in essence I'm adding 0.5 oz of orange-kumquat-cinnamon liqueur to the drink. 0.5 oz of orange liqueur and 1 tsp each of falernum and cinnamon syrup is a decent substitution, though you'll want to add a bit more lime juice as well to balance the sweetness and overall the drink won't be quite as spicy.


This tequila is aged for six months, which has the effect of adding a very pale golden color to the spirit and rounding off many of the shaper edges found in its blanco cousin. There is still quite a bit of agave flavor, but it's less aggressive and helped by a small dose of vanilla and spices, unsurprising results of barrel aging. I'd like to say that there are overtones of pineapple, but I'm not sure I can quite put my finger on the fruity notes in this tequila. While it works beautifully in a margarita, especially with the cinnamon and clove-tinged orange-kumquat liqueur mentioned above, it also slots well into one of the more bizarre drinks to come out of Beachbum Berry's books: 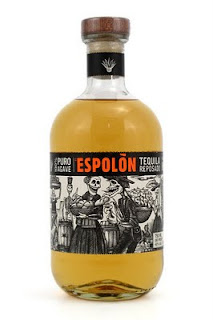 Yes, rum and tequila can play well together. There are a lot of strong flavors playing around including dark Jamaican rum (I used Coruba), which tends to have an almost burnt sugar flavor, to the tequila, which brings its distinctive vegetal agave, and the passionfruit syrup, which is an explosion of fruitiness with a sour edge. Balancing those elements are the orange liqueur (the cinnamon and clove of the orange-kumquat liqueur also slot in fantastically here) and orgeat, which somehow manage to do the job. Each part is in tension with the other, but they come together in a delectable whole. Don't believe me? You can also scale this drink down to half size, which is much more manageable and less likely to leave you sitting on the floor.

To summarize, I can heartily recommend the reposado bottling. It's an excellent deal that compares favorably with the other two reposados on my shelf, which cost $5-10 more. However, I'd skip the blanco. It isn't particularly distinctive, offering nothingthat the reposado doesn't but brashness. Even more damning is the fact that unlike most other tequilas, there is little to no price premium for the reposado over the blanco. Hopefully the distillers will be able to refine the blanco and differentiate the two in future, but right now the choice is clear.
Posted by Jordan at 9:58 PM