The Nui Nui presents what was one of Jeff "Beachbum" Berry's greatest challenges: determine the contents of the otherwise secret Don's Spices #2 and Don's Spices #4. Don the Beachcomber was notoriously secretive about the ingredients in his drinks, rightly fearing that they would otherwise be poached by other bartenders and owners in the cutthroat world of mid-century tiki-dom. The 'Bum relates in his essential tiki tome Sippin' Safari the extreme lengths that Don went to to keep his ingredients a secret:

“Ray would go to the Astra Company out in Inglewood to pick up #2 and #4,” Mike (son of a Beachcomber bartender) told the Bum. “A chemist would open a safe, take out the ingredients, and twirl some knobs in a big mixing machine, filling up a case …” Then they’d close the secret stuff in the safe. Ray (Mike’s father) took the bottles – marked only #2 and #4 – back to Don the Beachcomber’s.”

Berry was able to determine that #4 was cinnamon syrup via one of Don's early bartenders, Bob Esmino. However, #2 eluded him until he eventually sussed out that it was a 1:1 mixture of vanilla syrup and allspice dram. With that information in hand, the secret to the Nui Nui was finally unlocked. 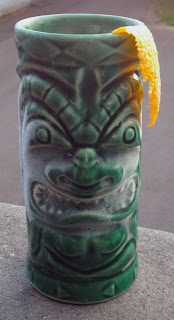 Combine all ingredients with a handful of crushed ice, blend for 5 seconds and pour unstrained into a chimney or tiki glass with more crushed ice. Insert a long strip (6+ inches) of orange peel into the drink and let some of it hang out.

The nose is dominated by orange peel and rum. The sip starts smoothly from the sweet vanilla syrup, then transitions into citrus from the lime and orange juices, finishing with a bit of spiciness from the cinnamon syrup and allspice dram. Underneath it all, the rum provides support.

For appearing to be a relatively straight-foward drink, this one is a bit tricky. Specifically, it requires the right rum. Cruzan 2 Year is my go-to for this drink, but I hear that Don Q Añejo and Mt. Gay Eclipse also work well. I've tried it with a few other amber rums, but for whatever reason the drink just didn't come together with otherwise stand-up rums like El Dorado 5 Year. If you want to bump up the sweetness of this drink (I know I used to, until my palate changed a bit), bumping up the Don's Spices #2 is probably the best bet, as the vanilla and allspice will counterbalance each other fairly well, though if you have really strong vanilla syrup it can get into orange creamsicle territory.
Posted by Jordan at 7:42 AM