Neisson is one of the newer distilleries on the island of Maritinque, having been founded in 1932 by Jean and Adrien Neisson. Still under family ownership, it remains the smallest distillery on the island, with an output of only 400,000 liters a year (for scale, Glenfiddich distills roughly 10 million liters of scotch whisky every year). Their rhum is produced from sugarcane grown on their own 40 hectares of land, with all of the cane cut by hand. Juice is extracted mechanically from the cane, then fermented for 72 hours before distillation. The wash is distilled in column stills to ~70% ABV as required by the AOC.

Élevé Sous Bois roughly translates as 'raised in wood' and Neisson's ESB is aged for 18 months in large 20,000 liter vats (for context, a standard barrel used for bourbon or scotch is ~200 liters). This means that there is relatively little wood contact, so the edges are smoothed off the raw spirit without imparting too many woody flavors. The rhum is then brought down to 50% ABV for bottling.

Taste: only slightly sweet sugarcane up front, with a bit of sharp acidic attack not far behind, some woody bittersweet chocolate and nutmeg comes in with an almost malty creaminess mid-palate, while vegetal flavors build towards the back, where winey brandy notes emerge. After adding water, the palate becomes sweeter with less acidic attack, overall becoming flatter like the nose.

Finish: clears quickly, with a bit of brandy residue and grassy oak

Neisson's ESB is an interesting contrast to the Rhum J.M. ESB that I reviewed earlier this year. While I would give a bit of an edge to the J.M., Neisson's offering does have a few things to recommend it. The slightly lighter flavors make it a bit more approachable and the honied, almost sherried character really does remind me of a Speyside single malt like Balvenie Founder's Reserve, overlaid on the traditional grassy, vegetal notes of a rhum agricole. I'm a bit disappointed with the lack of finish and how much it loses after dilution, but I suppose there's a good reason why it's bottled at 100-proof.

If you're a malt head looking to expand your palate to other spirits, this wouldn't be a bad way to dip a toe into the wild world of rhums. And while it's a bit on the expensive side for a rum, usually running into the mid-$40 range for a liter bottle, it's quite tasty and not too bad if you're used to single malt prices.

This rhum is not best suited to a daiquiri, unless you like 'em really funky. The lime seems to bring out the vegetal notes more than anything else, while the sweetness struggles to keep up. There some nice barrel spice notes, though the finish is a little rough. Unfortunately this is why I initially wrote Neisson off, as I was only interested in making cocktails and the daiquiri was my method for judging rums. So it was relegated to the back corner of my liquor cabinet, until I became more acquainted with neat spirits and decided to give it another go. However, with a little work, I think it can be made to fit reasonably well into a cocktail. 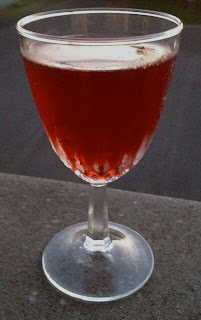 The nose is fruity, funky, and bitter, reflecting all of the ingredients in turn. The rhum seems to drag out just a few more berry notes from the Campari and vermouth. The sip opens smoothly, but not exactly sweetly, segueing into the traditional Campari flavors, but with overtones from the rhum lifting the drink and adding some grassy funk near the swallow. The chocolate spiced rum isn't assertive, but adds just a bit more chocolate, spice, and pepper near the back.

I snagged this drink from The Speakista, with slight modifications. I don't have any chocolate bitters, but the cacao nibs in my chocolate spiced rum seemed like a respectable substitution. Overall I think it's a good match for the Neisson, which is just smooth enough to blend harmoniously with the other ingredients.
Posted by Jordan at 7:20 AM