New Cocktails: Heart of the Palm

I'm striving to run down my liquor cabinet this weekend. A lot of what's getting low is bourbon, so I decided to make an Old Fashioned. Just to change things up a bit, I went for more of a tropical-style drink, with a number of different syrups accenting the whiskey. 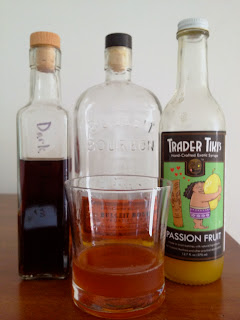 Combine all ingredients, stir with ice for 15 seconds, and strain into an old fashioned glass.

The nose is relatively sweet, with the bourbon's caramel notes accented by the palm sugar and passionfruit syrups. Some spice notes (cinnamon especially) from the bourbon mingle with the falernum and bitters. The sip is initially sweet, but restrained. A hint of tropical fruit and sourness comes in just behind, which segues into spice and wood notes from the bourbon, falernum and bitters, which carry through to the finish with lingering fruit.

While this is something of a complicated beast for nominally being an Old Fashioned, I think there's a lot that can be done by taking that basic form and accenting it with the tools of tiki drinks. High rye bourbons like Bulleit have a lot of spice that play well with ingredients like cinnamon, falernum, and ginger syrups. So you can get some nice tropical flavors while still producing a strong, punchy drink.
Posted by Jordan at 2:03 PM