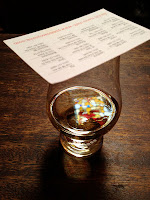 This the first time I actually tasted a Bruichladdich whisky, despite my post discussing the distillery's sale a few months back. I had seen a few bottles of the now-defunct Bruichladdich 12 Year Second Edition floating around and wondered if it was any good. So I took a ride down to the Highland Stillhouse, the premier whisky bar in the Portland area. The 'Laddie was my first dram of the afternoon and rather hit the spot.

This whisky was distilled in the period before Bruichladdich went silent in 1994. Older bottlings have been released as the stocks aged, with a 10 year old release in 2001 and the 12 year old bottlings starting in 2005. This is the second edition of what was intended to be a regular release. However the stocks ran out in about a year and a half, so it was eventually superseded by last year's Laddie 10, which was produced from whisky made entirely after the new owners took over in 2001.

Nose: definite but light creamy sherry influence, an edge of vegetal peat (no smoke), barely sweet nougat, creamed honey, gets fruitier and richer with air. After adding a few drops of water, gains a toasty note and becomes even creamier

Taste: moderately intense sweetness up front, muddled sherry and raspberry flavors mid-palate, becomes bitter/sweet (layered rather than integrated flavors) with some vegetal peat near the back. After dilution, the palate becomes a bit flatter, with more fruit but less sherry, intensity holding up well

Finish; a bit of ginger bite, residual sweetness, nougat, vegetal peat. After dilution it becomes a bit more vegetal with a hint of mint and increased creaminess

From what I can gather, the second edition of the 'Laddie 12 was not quite as good as the first edition. I found it to be a rather pleasant dram, but not sufficiently exciting to make me want to rush out and buy a bottle. As I mentioned at the beginning, there are still a few left floating around Portland, but they're over $70. This whisky reminded me a lot of Glenmorangie Quinta Ruban, that distillery's sherry cask finished single malt. As that whisky usually runs in the mid-$40 range, it's hard to justify the 'Laddie except as an interesting piece of whisky history. If it's ever marked down below $60, I think I'd give it a go, both as a curiosity and to see if I can tease anything more out of it. Further on, I'm looking forward to trying the new 'Laddie 10 to see how their new spirit compares to that made under the previous owners.
Posted by Jordan at 5:41 PM