House Spirits is a Portland distillery that was established in 2005. Best known for their Aviation gin, they also put out what used to be known as their Apothecary line - small runs of experimental spirits. This has included everything from ouzo, gammel aquavit, malt whiskey, and rum.

This rum was released during the Great American Distiller's Festival in 2011. Made with molasses, the white rum was aged for nine months in ex-Chardonnay wine barrels, then diluted down to 40% ABV for bottling. 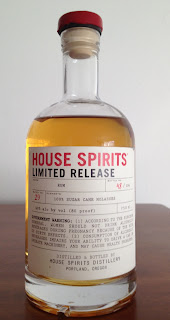 Taste: very smooth, creamed brown sugar up front, mild oak, light esters, and pepper mid-palate and back. After dilution it becomes sweeter, but the molasses notes are lighter, with the wine cask finally becoming present.

This rum is a huge improvement on their first versions, which were made with turbinado sugar rather than molasses. There is much more body and depth of flavor. With that said, while this is a significantly better effort, there is still room for improvement. While precise distillation and the wine barrels did a good job of rounding off any rough edges, it doesn't have the kind of complexity I would hope for. If I had my druthers, future efforts would focus on increasing the ester content, either through different yeasts or dunder, in the Jamaican style. That would provide a richer base that could be combined with more active wine casks for something really unique and interesting.
Posted by Jordan at 8:44 AM